Mahal ang lalake, kasi (Males are expensive, because) you need their genes for the next generation,” Eric Hernandez says. He is referring to male rabbits.

Eric, 27 years old and father of three kids (two girls and a boy), is a member of the board of the Philippine Rabbit Raisers and Fanciers Inc.

His eldest daughter asked him for a pet rabbit as a gift after she topped her class. This got Eric started on the rabbit hobby. The B.S. Biology graduate is all smiles as he explains the joy of raising rabbits. “They are huggable creatures. Very silent and gentle. Sobrang relaxing makita sila. Nakakatanggal ng (Seeing them is very relaxing. [The sight of them] can remove) stress. For me it’s just a hobby and not to make money,” he says. Rabbits, like all pets, need love and proper care.

“I have 52 breeders: 15 males and 37 females. I don’t give them names, kasi ‘pag na-attach ka na sa kanila, ayaw mo na ibenta (because if you get attached to them, you won’t want to sell them),” he laughs.

It is said that rabbits can learn to follow simple voice commands, come when called by name, and are curious and playful. But experts say that rabbits do not make good pets for small children as rabbits are fragile and easily injured by rough handling, as frequently frightened by loud noises and sudden motions. 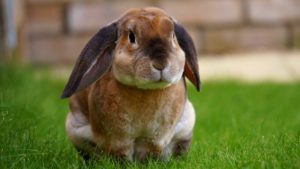 Eric explains the rabbit color points or coats. “Here is a Black Tort; it has a coat similar to a tortoise shel l. This one is Broken Black; it has a broken cow-like pattern. My favorite is this American Chinchilla; it has three-layer colors: blue, gray, and black.”

Among rabbit fanciers, the genetics of coat color and hair properties are paramount. “It’s not expensive to feed them. Grass worth ₱300 will last for 2 weeks. I also give them high fiber pellets which have all [their] nutritional requirements,” he says. “Fresh water should always be available, either in a water bottle or bowl.”

Rabbits have as much color variation between them as do other household pets, and vary in other traits from breed to breed, such as in coat length and textures, body shapes, ear length and position, tail size, etc. Eric puts a Teddy Wider, a woolly rabbit with lopped ears, on the grooming table. “A little trivia: did you know that [the cartoon character] Bugs Bunny is not a rabbit but a hare? Hares are bigger than rabbits. Pag pinanganak may balahibo na at naglalakad na mga babies (When they are born, they already have fur and the babies can already walk),” he laughs.

During the Easter season, rabbits are especially popular pets in the United States due to their association with the holiday. Even in the Philippines, bunnies are omnipresent during the Easter egg hunt and used as pr ops for window displays at big department stores.

Sadly, animal shelters that accept rabbits often complain that during the weeks and months following Easter, there is a rise in unwanted and neglected rabbits that were bought as Easter gifts, especially for children. Poor rabbits.

Easter or not, rabbits will be popular pets all year round. Whether it’s a three-pound Dwarf Hotot or a twenty-two pound Flemish Giant, there will always be a responsible rabbit fancier who will take care of them.

As a parting shot, Eric advises “Never hold a rabbit by the ears like what magicians do.”