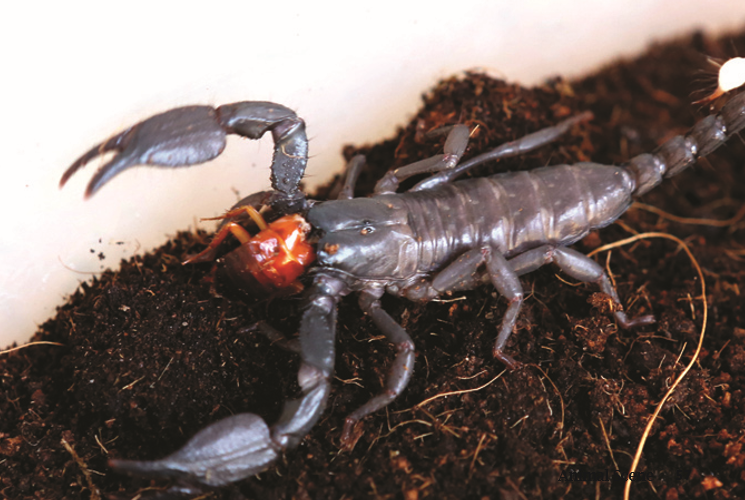 Basic information and knowledge an invertebrate lover should know about Swammerdami.

Also known as: Indian or Asian Giant Forest Scorpion or swammer; it is an invertebrate, and related to mites, spiders, and ticks.

Habitat: Under rocks and logs; occasionally burrows. Can be housed in a heated aquarium or terrarium with a capacity of 10 gallons.

Temperament: While popular as a pet, it is generally more aggressive than its lookalike, the emperor scorpion. It is easily provoked into being defensive, and uses its pincers to defend itself.

Feeding: Pinhead crickets, mealworms, and any other small creature it can grab. Feed once every few days, although once-aweek feedings are okay. The older a swammer gets, the less it eats. It also needs fresh water daily.

Other considerations: Leave molting scorpions alone; when they are molting, they will hide and refuse food. Because their bodies are very soft, they are vulnerable to injury when freshly molted. Ideally, swammerdami should not be kept in groups unless you can commit to regularly feeding all of them well; otherwise they may resort to cannibalism.

Notable for: Being among the largest living species of scorpions.