Around The World With Animals And Animal Lovers

Several photos to get you fascinated and inspired upon the world of animals and the animal lovers around the globe. Malia Ebel, left, walks her dogs, Seymour, left, and Sanders, both Cavalier King Charles spaniel mixes, alongside Wendy Olcott and her golden retriever, Sunny, as each dog wears winter booties, in Concord, N.H. A harsh winter across the country has pet owners buying the boots to protect their pets’ paws. (AP Photo/Jim Cole) Britain’s Prince William feeds Ran Ran, a 13-year-old female elephant who was discovered in 2005 with a leg wound caused by an iron clamp trap in Xishuangbanna in southwest China’s Yunnan province. William highlighted his interest in wildlife conservation on the final stop of his China tour Wednesday, feeding baskets of carrots to an elephant in the country’s southwest. (AP Photo) 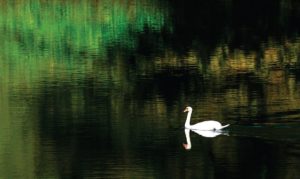 A swan swims in the moat surrounding the Imperial Palace, as trees are reflected in the water, on a sunny winter day in Tokyo. (REUTERS/Thomas Peter) A one-horned rhinoceros grazes at the Pobitora wildlife sanctuary, in Pobitora, India. The sanctuary has the highest density of the one-horned Rhinoceros in the world. (AP Photo/ Anupam Nath) Fifteen tons of elephant tusks are set on fire during an anti-poaching ceremony at Nairobi National Park in Nairobi, Kenya. Kenyan President Uhuru Kenyatta set fire to the elephant ivory during World Wildlife Day to discourage poaching, saying that 25 years after the historic banning of the ivory trade, new demand from emerging markets is threatening Africa’s elephants and rhinos. (AP Photo/Khalil Senosi) Cats walk along the embankment as a man fishes on Aoshima Island in Ehime prefecture in southern Japan . An army of cats rules the remote island in southern Japan, curling up in abandoned houses or strutting about in a fishing village that is overrun with felines outnumbering humans six to one. (REUTERS/Thomas Peter)