Sarcoptic mange is a dermatologic condition (skin disease) that is highly contagious and is the result of the multiplication of a parasite called Sarcoptes scabiei var. canis. This is more properly referred to as “sarcoptic mange” in dogs and is characterized by alopecia, redness with crusty, scaly skin.

I will refrain from calling it “scabies” because that is definitely another disease entity; the term in human medicine is often misused or confused for mange in dogs. In fact, the term “scabies” is more aptly used in the context of human medical dermatosis.

ALSO KNOWN AS:  Galis aso; most common type of mange in dogs

CAUSE: dogsThe Sarcoptes scabiei mite; female mites burrow into skin and lay eggs. This causes the terrible itching that characterizes the disease; when the larva hatch and penetrate deeper, the itching gets worse.

SYMPTOMS: •Crusting of area where mites have burrowed

HOW IT’S SPREAD: Contact with affected dogs, whether direct or indirect (use of same cage, kennel, accessories, etc. used by sick dogs)

HOW LONG BEFORE IT MANIFESTS: Symptoms appear anyhwhere from 2-6 weeks after exposure.

CAN IT AFFECT PEOPLE AND/OR OTHER PETS?: Yes, but the mite prefers canines

WHERE DOES THE DISEASE MANIFEST?: Across the world

•Can be mistaken for many other skin conditions

• Must be treated as early as possible for best results

PREVENTION: None, except to avoid exposure.

IF LEFT UNTREATED…: Can result in chronic skin problems such as skin darkening, thickening, and wrinkling

SOME CLARIFICATIONS – However, the differences end there. In parasitology (the study of parasites), the clinica (disease appearance)/parasite morphology similarities are striking. For instance, the parasite in this case is called Sarcoptes scabiei var. hominis (human) or Sarcoptes in humans. In dogs or canines, it is referred to as Sarcoptes scabiei var. canis (dog variant). 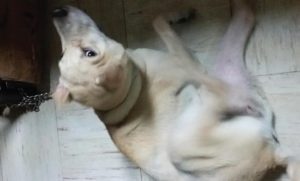 Animals are not a source of human scabies. In the same manner that Sarcoptes in the dog is not well-adapted to human skin, adult parasites rapidly die and cannot reproduce. I have to reassure dog owners that they can recover from transient infestation (temporary dermatologic conditions in the human). The only thing you need VISITto do is have the pet dog treated for sarcoptic mange by a dog and cat practitioner.

A number of anecdotal terms for the condition have arisen in the native tongue, including “nakakain ng malansa,” or “napakain ng seafood,” or worse, “napakain ng basura.” These terms are well-entrenched in many a dog owners’ vocabulary.

It has to be pointed out that as a dog and cat practitioner, my clinical experience (spanning 20 years) has shown me that the condition is seen in puppies as well as young dogs, especially those coming from pet stores, as well as from some breeders. It must also be pointed out that it also occurs in adult dogs. The above statement is merely a clinician’s point of view based on history-taking and long years of experience, as well as the number of cases it is true for every positive or confirmatory diagnosis. There is no malice intended.

IDENTIFYING THE CONDITION – Let’s get to the bottom of things. How do you discern that sarcoptic mange is affecting your dog? That is a little tricky to answer quickly without first observing some well-defined clues. After all, this infestation (this word is preferred over “infection”), due to the fact that the signs as well as skin lesions, is not very clearly seen or observable at first. However, as time progresses, the pruritus (medical term for severe itching) is greatly increased and causes erythematous papules (small red raised pimples or swelling), which at this point are encrusted.There are areas in the skin that are particularly affected: margins of the ear, elbows and hocks, the ventral portions of the abdomen, and the chest. There is eventually a gradual spread all over the body as this parasite is known to burrow under the epidermis (skin) of the dog. It’s interesting to point out some things concerning this parasitic disease that are rarely discussed in the clinic setting. For one thing, that the source of infestation is usually direct contact via another dog or indirectly through contaminated premises and or bedding. The dogs usually infected are so-called naïve dogs—puppies, that is—that are exposed to feed, water buckets, and other equipment.

Just when you think that such a thing is all in the mind, I once held in my hands a dog I hadn’t diagnosed positively for mange. To my disbelief, I begin to itch as the dog was itself inexplicably scratching itself wildly as well, like there was no tomorrow. Since I was stillr relatively young then in the practice of the profession, I respectfully asked the owner if I could do a simple skin-scraping test. The skin scrape test yielded positive results, and the dog needed to be treated accordingly.

Ethical considerations dictate that we veterinarians in the field of companion animal medicine never teach clients to self-medicate in order to avoid patient poisoning, and complications arising from the erroneous treatment of an animal that is already sick and or debilitated.I do hope that it doesn’t rub my readers the wrong way if we uphold our ethical standards by intentionally withholding information on the methodology of treatments. After all, in my previous articles, I have asserted that I was the past chairman of the Council on Ethics of the Philippine Veterinary Medical Association, and as such, I must subscribe to a higher ideal.

SYMPTOMS AND DIAGNOSIS – The history is descriptive of a rapid onset of severe itching. The sources of possible contagion will more often than not include pet stores, grooming parlors, and the most unlikely place, the veterinarian’s clinic. There must be evidence of spread to other dogs or humans and to a lesser extent, cats as well.

Also, when you see the dog scratching itself to death by targeting its ears as though something in there is irresistibly itchy then you know you must consult with a veterinarian. Why should you? Pruritus is but a mere clinical sign that other diseases also manifest and the list is quite a long one. It is a wiser choice to have your veterinarian do the diagnosis for you.

More often than not, this parasite is not detected after just one visit to the veterinarian. It has to be done correctly as well as consistently. Please do not diagnose it yourself. Let me be clearer as to why veterinarians in the dog and cat fields are better equipped in diagnosing dermatologic illnesses for reasons in addition to their knowledge as well as skill.

For one, to the layman, everything looks the same; there is little opportunity for the skin to respond. Second, the same disease can have different manifestations. A third reason merits closer attention in those secondary infections as it almost always causes general itching and masks the original manifestation. The fourth reason is even worse in that several diseases are present at the same time and this can be baffling. Many diseases that manifest as skin problems are multi-factorial in origin, like canine atopic dermatitis, and are better left in the hands of the veterinarian. After all, the skin is an organ that only has a very limited opportunity to respond to various stimuli. As a result, many skin diseases look alike. Give your burdens to us; we are glad to help.

The more research-oriented diagnosis may probably include serology for IgG antibodies as well as a histopathology for sarcoptes. However, in the Philippines, such a set-up is impractical and not advisable.

For those who are interested in the classification and or nomenclature (name assignment) of mites, noteworthy is the fact that these arthropods are more related to spiders and ticks (“garrapata” in Spanish) than they are to insects. Remember that the spider and tick has four legs on each side while the insect has three on each side.

Also, some so-called “ear canker” infestations are actually caused by a mite called Psoroptes, which is not exclusive to rabbits but is seen in horses, sheep and cattle. The word “canker” only describes the accumulation of dead cells as well as the dried-up serum oozing after trauma to the skin is induced because of scratching. (Additional text & research by CFB)