Put A Little Love In Your Heart: Why You Should Spend Time At A Shelter

Animal Scene (AS): WHEN DID YOU START GOING TO PAWS?

AS: WHAT BROUGHT YOU TO PAWS IN THE FIRST PLACE?

T: “We had a poodle who was bleeding, and we didn’t know why. The vet near our house… [how do I say this]… there was no feeling of trust. They didn’t answer all of our questions about our dog.” 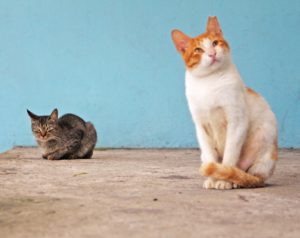 Two residents pay their respects to those gone before them; they are sitting in front of the row of cremated pets.

AS: BECAUSE THEY COULDN’T OR THEY WOULDN’T?

AS: SO YOU KEPT GOING BACK?

AS: YOU CAN’T PUT A PRICE ON THAT KIND OF LOVE.

AS: SO YOU STARTED GOING BACK TO VOLUNTEER?

AS: ANY CASES THAT STICK OUT IN YOUR MIND? Office Cat performs her routine inspection of everyone else’s things.

AS: AND THAT ALSO MADE A DIFFERENCE FOR YOU?

AS: THEN WHAT MADE YOU VOLUNTEER? THOSE CASES?

AS: THAT’S AN INCREDIBLE TAKEAWAY

AS: SO WHAT MADE IT IMPORTANT FOR YOU TO VOLUNTEER? WHAT DOES IT BRING TO YOUR LIFE?

T: “Well, they run on volunteers, and the primary complaint is that they’re undermanned. They helped me, so I pitched in because they needed help too. You do what you can, because you’re always given a decision: [are you going to be a burden or are you going to help]? And BACKaside from that, I guess it’s also about counteracting, well… I have a relative who used to be a breeder.”

AS: DID YOU FEEL GUILT ABOUT THAT ?

AS: YOU TRY, THOUGH.

AS: AND ON A MORE—FOR LACK OF A BETTER WORD—SELFISH LEVEL, HOW HAS IT AFFECTED YOU?

T: “I’ve come to realize, through friends and fandoms, when you’re at the end of your rope, emotionally… what matters then, in the scheme of everything, is that you can look back and remember the little things you did for others, especially those who can never repay you. And that gives you strength; you made yourself matter. Overall, though? It makes you feel different. You won’t get a medal but you did something good.

You can visit www.paws.org.ph/volunteering.html to find out how you can lend a paw.