Arowanas became popular because of the belief that they create luck and attract wealth.

You will often find them in private business offices as well as commercial establishments. They are called the “king of aquarium fish.” I guess discus lovers will not agree with this. 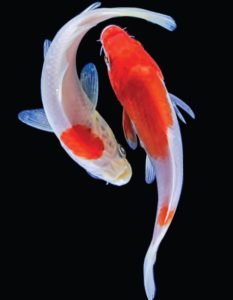 Arowanas are also called “dragon fish” because of their scales and barbells, which are similar to those on popular depictions of dragons. They have a calm swimming style, confident even if kept alone in an aquarium. They are jumpers and break the FISHwater’s surface when they are in the wild to catch prey.

1. The arowana. Even when young, arowana are already valued based on their farm origin and genetic history.

2. Koi. Pattern, shape, and size are major factors determining the price range of koi. They breed in the thousands but the percentage of quality fish coming from these breedings are slim.

Popular Types of Arowana in the Philippines

Arowanas bred as pets originated from Asia, Australia, South America, and Africa. Each has unique personality traits and behavior.

RED AROWANA – Maybe one if not the most expensive of all, they come in different base colors, which makes their variety more exciting. Popular arowana reds are Super red, blood red, and Chili-red. CROSSBACK GOLDEN AROWANA (XB) – The Crossback arowana’s main feature are the gold scales that reach up to the sixth row of scales. When it is still young, the scales are slightly yellow “shines” towards the fourth row. When the crossback becomes an adult, all scales will turn gold in color. Personally, I would love to own a crossback soon because they are a truly majestic sight. Purple and blue are two most common bases for crossbacks.

GREEN AROWANA – Green arowana cost less than other varieties. I find their color more of combination of green and silver, depending on the angle and lighting. Green arowana are good start for beginners wanting to try caring for arowanas.

SILVER AROWANA – They have a slender, flat-shaped body. Like the black arowana, they are also susceptible to droop eye. They are the lowest priced among all arowana in the Philippines. A good start for beginners on a budget

6.5Other arowanas available locally include the Jardini, African black, and recently, albino strains of silver and red.

These are my suggestions and information for those who want to keep arowanas, especially the RTG.