It doesn’t come as a surprise that once I became enamored with Tokyo’s Sunshine Aquarium, I would set out to see other such attractions. The Osaka Aquarium Kaiyukan, established in 1990, is famous for being one of the largest aquariums in the world and sits beside Osaka Bay.

On the train going there, we found ourselves with several Japanese families; practically all those walking with us had happy and excited children with them, and nearly everyone was going to the Osaka Aquarium. It was reminiscent of my trips to Disneyland. 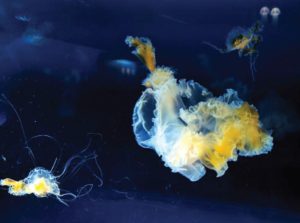 likeA very rare type of jellyfish discovered in the north of the Sea of Japan.

Earlier, after a simple breakfast, we approached the hotel front desk to buy our entrance tickets. Bundled in the the package for ¥2550 was the Aquarium pass, as well as a whole day pass on the Osaka Municipal Railway System! This was delightful, since it was similarly priced as the tour to the Tokyo Sunshine Aquarium, which was a third of the size. Wow, this was really going to be a treat, I thought!

Soon, we were in line with hundreds of people visiting the Aquarium, locals and foreign tourists alike. The courteous and smiling staff checked each ticket, and we chose to rent the biggest locker for ¥600, where we dropped off our bags and heavy winter wear and proceeded with the crowds to enter. Schools of marine fish thrive on daily meals of squid and anchovies.

It’s not easy joining hundreds—possibly even thousands—lining up to see various fish on display in an aisle that measures less than four meters. Compounding this was the dark passageway and the kids that one may trip over. But the discipline and courtesy so obvious throughout Japanese society served us well as almost everyone seemed to give way to one another, and you can observe parents continuously disciplining their children to behave. The loud voices and animated conversations were in Cantonese or Mandarin, as there were droves of Chinese tourists; absent, though, were their tour guides holding up red flags.

It’s not true that if you have seen one, you have seen all of the different aquariums. Compared to Tokyo’s Sunshine Aquarium, which had three independent floors showcasing various tanks of sea and freshwater fish, Osaka was four floors of mostly marine fish connected through a huge main tank containing the largest whale and hammerhead sharks swimming with huge stingrays and groupers! Thus you realize eventually that central to your descending various stairways and ramps, on your right is a huge main tank and on your left are various sub-tanks showcasing various species from the ocean from Tasmanian to the warm Pacific. An aquarium employee plays with his shark friend during the morning feeding routine.

The Osaka Aquarium averages over five thousand visitors each day, with this number tripling on weekends and on holidays. Growth in the area is inclusive; the train system is one proof of this, as buying a discounted pass from the front desk of one’s hotel gives you an entire day’s pass for the Osaka railway line. Needless to say, your tour of the mega city comes free with your ticket to the aquarium.

• Kaiyukan is famous worldwide for being one of the biggest aquariums in the world, its innovative presentation of its creatures, and for its unique use of acrylic for its tanks.

• Features the aquatic creatures of the Pacific Rim in their recreated natural environments, and the reptiles, birds, mammals, and amphibians endemic to other exhibits. • Visitors work their way down from the eighth floor to the ‘sea floor’.

• The aquarium’s theme: “Our planet and all living things on it are closely integrated with each other, forming a single organism.”

• Learn more by logging on to http://www.kaiyukan.com/language/eng/concept.html or calling the Information Counter, +81-6-6576-5501 or emailing info2@kaiyukan.com

• How to get there: Kaiyukan is in the Tempozan Harbor Village, in the bay area of Osaka, and is easily reached from the Osakako Station on the Chuo subway line.

• Operating hours are 10 AM to 8 PM (extended to 9:30 PM in the summer months), with last visitors allowed in an hour before closing time.