Rising in local popularity is the “nishikigoi,” Japanese fancy carp, or more popularly known as koi. With an estimated thousand koi keepers, hobbyists, and enthusiasts all over the country, more koi shows are being held in Luzon, Visayas and Mindanao to cater to their need for a venue to gather and see the latest developments in the trade.

The Philippine National Koi Show (PNKS) is considered the grandest show of them all, and the 2017 edition saw a 30% increase in the vats to accommodate almost 300 koi entries. Such was the demand for accommodation that organizer Russell Tantuco of Koi Hob even had to publicly apologize to those whose koi weren’t accommodated due to the limited space allotted for the show by the venue, Tiendesitas in Pasig City. 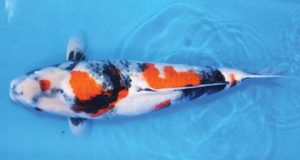 This years’ show featured 2 grow-out competitions: grow out A & B. Both saw a kohaku, the red and white koi that is the trade’s most famous variety, winning Grand Champion.

The Grand Champion B for the main show went to an 86 centimeter Ginrin Kohaku, which has competed since the show’s first edition, winning each year in her size category.

The Grand Champion is from breeder Mitsunori Isa of the acclaimed Isa Koi farm, popular for their showa. This is the third Grand Champion koi win for the owner and the second for an Isa-bred koi at the PNKS. 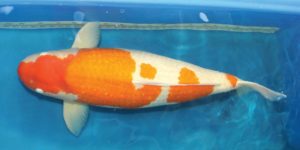 Mitsunori-san was joined by seven other Japanese breeders who served as judges for the show. The awarding ceremony was well attended by familiar faces, more popularly known as the “Koi Bois,” along with other local koi dealers and hobbyists from around the country.

Malaysian Koi food makers Kenneth Chong and Darren Tan of Kokusai Koi food also graced and supported the show, and locally, Lendl Christopher, representing Hikari Koi food, was also present. Peter Waddington, maker of Eric filters, travelled all the way from the UK to attend the show. Participants remarked on the fun and camaraderie they enjoyed at the PNKS. (With reporting by Russ Tantuco)