How to Tell if Your Bird is Sick

Owning a pet bird carries many unique challenges that just aren’t present for owners of more common pets like cats or dogs. Unlike those pets, which are mammals, birds are more closely related to reptiles than to us humans. That means it may be trickier to understand your pet bird’s health and physiology than it would be with a mammalian pet. This is why it is very important to be familiar with the signs of a sick bird before they come up.

ATTITUDE IS EVERYTHING – Healthy birds are alert and responsive to everything that goes on around them. They have excellent balance and will maintain an upright posture, using both legs equally to carry its weight. If perched, they will usually hold both wings close to their body at equal heights.

Sick birds, on the other hand, often sit around the bottom of the cage. They may be aggressive toward their cage mates, or they might have difficulty maintaining their balance. A bird with its head tucked in all the time may also be sick or injured.

MAKING WEIGHT – Birds usually consume a regular amount of food and water every day, so a decrease in the amount a bird eats or drinks can also be a sign of illness. Sometimes, a sick bird will sit around and peck at its food, but will actually drop more food than it swallows. Weighing your bird regularly at the same time each day, usually right after it wakes up and before you feed it, will help you determine if your bird is eating right. If your bird loses more than 10% of its normal body weight, take it to a veterinarian as soon as you can.

The keel, that extension of the breastbone present in birds, should be well-muscled but easy to examine with your hands, or palpate. If muscle definition is lacking, then your bird may be underweight. If the keel is hard to palpate, then your bird is overweight and could use some diet and exercise. Hold back on those crackers for Polly! 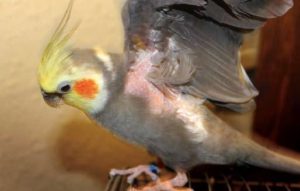 BREATH OF LIFE – Healthy birds have smooth, easy breathing, with their beaks closed when they are at rest. A bird that breathes with its mouth open while it is at rest is one of the clearest signs that a bird is sick. In fact, open-mouthed breathing suggests that a bird has been sick for quite some time.

Another sign of breathing trouble in birds is known as tail bobbing. Unlike us humans, birds lack a diaphragm, and use muscles on the bases of their tails to help expand their lungs while they inhale. If they are having trouble breathing, the tail muscles have to work harder, which causes the bird’s tail to bob up and down.

Both of these signs of respiratory distress are very serious, indicating the later stages of illness, and require an immediate trip to the vet, and possibly hospitalization as well.

BIRDS OF A FEATHER –  A bird’s skin and feathers are also good indicators of its overall health. Normal bird skin should be free of redness, swelling, lesions, or discharge. Check the skin under the wings, the scales on the feet and legs, and the bare facial patches found in some species of birds. Bare skin that should normally be feathered is usually a sign of disease, such as mites or mange, although young birds sometimes pick at their feathers before their first molt. This should change as soon as they learn to take better care of their feathers.

Sometimes birds that pick at the feathers in a particular area are indicating a pain response to a disease in that area, causing itching and self-trauma. A skin biopsy from your vet can determine if a bird’s feather picking is behavioral or caused by an underlying infection or disease. Feathers that are clumped up or stuck together can also be an indication of sickness.

DROPPING HINTS – A bird’s droppings can tell us a lot about how healthy it is. Fortunately bird droppings don’t smell like mammalian excrement! Birds do not have a cecum attacked to their large intestines, and the gas and odors that result from fermentation are not produced. Lucky for the owners, as pet birds can poop up to 40 to 50 times a day!

Normal bird droppings are made up of three parts: feces, urate, and urine. The feces are usually an even green in color, and come from the intestines. The urate is the white portion that everyone is familiar with, and is usually equal in amount to the feces, and there is usually just enough urine to make the dropping glisten with wetness. Both the urate and urine come from the kidneys. This means that each of the three parts can change with each other or independently, sometimes because of changes in diet or because of disease.

A complete lack of feces in the droppings can indicate either a lack of food intake or an intestinal obstruction, which is uncommon in birds. There may be an egg stuck if the bird is female, or a foreign body in the digestive tract.

A change in color in the urate from white to yellowish-green, might indicate a metabolic disease, such as liver disease, or a viral or bacterial infection. This is because of the presence of bile which stains the urate. Too much urine, or polyuria, can indicate diabetes, kidney disease, or excessive water intake. However, an increase in all three portions may simply mean that the bird is holding its droppings in for a longer time. For instance, a female laying eggs will only poop two to three times a day.

Blood in any of the droppings is not normal and requires immediate medical attention.

VETERAN VETS – Becoming familiar with the signs that your pet bird gives you can go a long way toward monitoring its overall health. Still, there is no substitute for a visit to your local veterinarian. An experienced vet is better trained to read the symptoms of animal illness, and can cut out much of the guesswork that goes with raising a healthy, happy pet bird.

In fact, it is a good idea to take your pet bird to your vet regularly without waiting for a crisis to erupt before you go for a consultation. Many bird owners only take their pets to the vet during emergencies, which means that the vet is not familiar with the normal disposition of that particular bird and will have nothing to compare its current state with. Build your bird’s relationship with your local vet. After all, an ounce of prevention is worth a pound of cure!