Pimelodus Pictus: An Active Catfish For your Community Tank

Last weekend, I was taking a stroll when I chanced upon a fish store. Naturally as a certified fish nut, I couldn’t resist not entering the store. Without wasting a minute, I found myself inside, slowly checking out each of the tanks. It was a simple store with common fish; in fact, most of the fish I saw were the ones I had kept when I was very young and starting out, mostly goldfish, guppies, swordtails, angelfish, and several species of common barbs and tetras.

In one tank however, I saw some Pimelodus pictus, better known among fishkeepers as the Pictus Catfish. I smiled as I remembered my first encounter with the P. pictus many years back. In a Tanknostalgic mood, I recalled that day many years ago in a fish store in Greenhills, San Juan.

THROWBACK – I was barely in my teens when I first saw some P. pictus in a tank. The tank was about 75 gallons or so, containing Clown Loach (Chromobotia macracanthus), Black Ghost knifefish (Apteronotus albifrons), Silver Dollars (Metynnis argenteus), and a few janitor fish (Hypostomus plecostomus). I recall being mesmerized by this tank instantly. Yes, I was mesmerized by the Silver Dollar and the janitor fish. From today’s fishkeeping perspective, the Silver Dollar and janitor fish are very common fish. In fact, the janitor fish has since become a headache in our waters as it is now deemed as an invasive species and a pest. But in those days, both were quite rare and difficult to get. You may not be able to relate to this, but back then, they were really cool and exotic fish—fish that didn’t look like the ones I had at home. This was when I was introduced to the underwater world of exotic fish, and it was a turning point for me. I would no longer keep fish that everyone else had, like goldfish, mollies, swordtails, and angelfish. I wanted to go to the next level, and to keep fish that only the select few could: the exotic ones!

To this day, the P. pictus may be regarded as an exotic fish. They are available year round but not in great numbers; thus, sometimes, they are hard to find. This makes them more valuable to keep. If they were more commonly available, I guess they wouldn’t seem very ‘exotic’. So their being quite rare makes them interesting to keep. 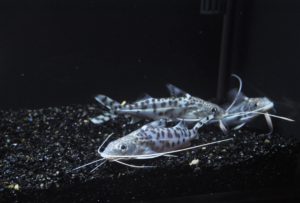 THE BASICS – P. pictus is a medium sized catfish that grows to about 4 to 5 inches in length and was first described by Austrian zoologist and ichthyologist Franz Steindachner in 1876. It is native to the Rio Orinoco and Amazon basins in Colombia, Venezuela, Peru, and Brazil, where it is found in shallow, flowing waters over sandy or muddy substrates, including both major river channels and their tributaries.

Stocks of the P. pictus usually arrive at a size of 3.5 to 4 inches when you see them in fish stores. I have not seen any smaller than 3.5 inches offered locally. Those which are bigger, I suspect, have spent a lot of time in the shop, so they have grown up in the store already.

The P. pictus has three pairs of barbels. And just like other catfishes belonging to the family Pimelodidae, its primary pair of barbels is long and extends up to the caudal fin or tail. The 2 other pairs are much shorter and points down from the chin. These are used to sense food around the mouth area. Like most catfish, its mouth is downturned.

It has a silver base body color, adorned by black spots all over the body. The dorsal fin is generally clear but is likewise decorated with black spots. The pectoral, ventral and anal fins are generally silver or white in color. The caudal fin is forked and is decorated with black spots. It has an elongated adipose fin (not all fish have adipose fins; these are normally small and button-like), found after the dorsal fin, and may also be decorated with some black spots. It has been observed that P. pictus from Colombia have a smattering of tiny dark spots all over the body, while those collected from Peru has much larger spots on the body and small spots on the head.

There is relatively little sexual dimorphism to determine the sexes. It is said that females are slightly larger and more robust in body shape than males. Breeding to this date is still relatively unknown.

CAUTION! – The pectoral and dorsal fins have sharp spines which can give you a nasty sting if they cut your hand. These spines have a mild venom which is essentially harmless to humans but will certainly cause a couple of hours of discomfort and swelling. So you must be very careful in handling them.

These spines are also a bane in other circumstances. They are serrated and easily get entangled in nets when they are being caught, and can also pierce through the plastic bags when they are being packed. So be very careful in catching and handling P. pictus. Nets with very fine mesh like those used for catching daphnia will work, but regular fish nets will surely injure the P. pictus. You may opt for using a plastic bag or container, but I warn you that you must have utmost patience and creativity when catching them with these.

PREFERRED PARAMETERS – In the aquarium, these fish prefer slightly acidic to slightly alkaline TANKwater with pH at 6.5 to 7.5. They also do well in soft to hard water with a dH range of 2.0 to 15.0. Best temperature for them is within the range of 25 to 28°C.

These are ranges that are commonly available to the Filipino fishkeeper, so generally speaking, no extreme measures are needed to attain the pH, hardness, and temperature ranges required by the P. pictus.While P. pictus is generally a hardy species, it must be remembered that having an efficient filter with an effective maintenance system of weekly partial water changes is important to keep them healthy. As with other catfish, P. pictus is sensitive to deteriorating water conditions. If the aquarium water is bad, you will notice that their barbels will melt. If left untreated, these may rot and cause your P. pictus to die. So be vigilant with your maintenance schedule and you will be rewarded with healthy P. pictus that will never give you a dull moment.

PERSONALITY – If you think catfish are timid and usually just hang around at the bottom, well, the P. pictus is the opposite of that. It is the Energizer Bunny of the catfish world! This fish could probably be diagnosed with Attention Deficit Hyperactivity Disorder (ADHD) as they are always on the go. They swim around the middle and bottom parts of the tank, non-stop! If you have a few of them, they always bother each other, chase each other; if one is resting, the others will pounce on it and they will start chasing each other all over. It seems this fish is always on an adrenalin rush; they don’t just swim leisurely, but rather, they always swim full speed, darting and zipping around the tank. Your tank with P. pictus will never be boring. Your tank will be full of action, suspense, and a little drama.

P. pictus are the perfect bottom dwellers for the community tank. They are generally peaceful occupants in a tank with medium-sized and active fish. They are non-territorial so they will not show aggressive behavior toward tankmates. They may be kept in a large aquarium of around 75 gallons with Rainbow fish, barbs, small- to medium-sized cichlids, loaches, gouramis, Rainbow and Red Tailed Black Sharks, Bala Sharks, and medium sized tetras.

Small tankmates like Neon Tetras, Rummy Nosed Tetras, guppies, etc. may be eaten. After all, the P. pictus is a catfish with the legendary catfish appetite and will eat anything they can fit in their mouths.

FEEDING TIME – The P. pictus is an omnivore and will eat almost anything offered to it. They take commercially prepared fish food in pellet, wafer, or granule form so long as these sink to the bottom. Frozen blood worms are irresistible to them. Bits of fresh fish, shrimp, and mussels will also be relished, as will live food like tubifex worms and small feeder guppies or mollies. The P. pictus, like any catfish, will gorge itself when food is offered, so be wary of overfeeding them.