A Survey of Short-Tailed Dogs

We have a little eight-year-old dog named Bob. Though we’re not sure what kind of dog he is, Bob is certainly not an Aspin (Asong Pinoy, native dog). His physical attributes don’t exactly match the standards one finds in canine books. Our Bob is small with a lithe body supported by short, bowed legs. He has a long face, literally, and his ears are erect. But his most endearing feature is his cute excuse for a tail that lends him a big personality.

Bob has a teeny weeny tail, like a stub; nonetheless, he frantically wagged it at us to say “hello” the moment he was introduced to us. Bob’s tail looks to be only about an inch long or less, but it’s quite amazing to watch him make the most of it to happily greet friendly people. They say dogs with stumpy tails or who are tailless are cuter. Do you want one? A little Googling reveals 10 breeds lacking in the tail department―but certainly not when it comes to being adorable! The English Bulldog, short and chunky, is one of the most famous dogs in the world, easily identifiable by its grumpy-looking face layered with skin folds, a beefy body, and small legs. Bulldogs have naturally short and curled tails, or no tail at all.Another breed of bulldog, the French Bulldog, also has a naturally short tail that measures only about an inch. 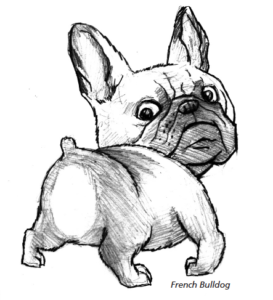 Some French Bulldogs are born without any tail at all. The popular “batty-eared” French Bulldogs were bred as a smaller version of English Bulldogs and they resemble each other in some ways. Aside from their petite tails, they also share the distinctive folds or layers on their face, strong jaw and thick neck. The Australian Stumpy Tailed Cattle Dog and the Australian Shepherd Dog both have short tails. The former has a naturally diminutive tail that is no longer than four inches. Articles about this special breed indicate that three breeds of dog―the Dingo, the naturally bob-tailed Smithfield, and the Collie―were the ancestors of this “stumpy” breed. The result: a dog with a tail that looks like it’s been docked although it hasn’t been.

The Australian Shepherd Dog is not from Australia, despite its name. This athletic, furry dog may or may not have a tail. This is one energetic dog that loves to shepherd livestock and people and can be quite bossy even inside the house. The Australian Shepherd Dog loves activities and tends to bark a lot when it can’t expend its energy; perhaps this is its way to compensate for its small or missing body part? Tails are important to dogs, as they use it to express themselves. Without it, a dog like the Australian Shepherd Dog must rely on other means and tricks to get attention. The French Pointer is a hunting dog that is eager to please and work. Also known as Braques Francais, these lovely white-and-brown pointing dogs have small tails that stand alert when they go hunting. Another French dog, the Braque du Bourbonnais, looks almost the same but, based on the few articles available about it online, it seems to be an older breed but with features similar to those of the Braques Francais. It was also designed to be a hunting dog. Another blunt-tailed dog from Europe which is currently quite popular is the Pembroke Welsh Corgi. The Corgi is the personal favorite of Queen Elizabeth who keeps a couple of them in her royal court. Not every Welsh Corgi, however, is tailless, as there are some that develop some kind of stump behind them which sometimes can grow up to two inches long. The Pembroke Welsh Corgi, however, has a full-tailed cousin, the Cardigan Welsh Corgi. The Boston Terrier is a true American dog. Its body is distinctively well proportioned and compactly built. What it lacks in the tail department, it makes up for with long ears. Its muzzle is also short but not wrinkly. Boston Terriers are said to be the only short-tailed breed of dog without the so-called C189G mutation present in naturally short-tailed dog breeds. A Doberman Pinscher―or simply Dobermann in some countries―is an easily recognizable and handsome breed of pet or working dog. Aside from its dashing looks and squarish, muscular chest, it is also known to have a stubby tail. But Doberman Pinschers’ natural tail is actually long; owners or breeders often have these docked. Today, the Doberman’s cropped tail is considered part of its standard looks and is accepted in the show ring. Another true American breed, the Toy Fox Terrier is a big bundle of joy in a small package. This intelligent working dog can be an effective hunter of smaller animals like squirrels. It has a distinctively cute small tail that goes well with its diminutive body size. To create this breed, experts say a small Smooth Fox Terrier was crossed with other toy breeds that included Chihuahuas. Whether it’s the Giant Schnauzer or the standard kind, the Schnauzer dogs from Germany usually come with a cropped tail. Cropping this breed’s tail was a common practice in other countries to give the dog a distinctive look or to make sure their tails don’t get in the way of their work. Aside from its purposely shortened tail, a Schnauzer is uniquely identifiable by its feathery eyebrows, long beard, furry legs, and salt and pepper coat. Docking is a procedure done early in the life of a puppy. Most of the tail is surgically removed shortly after birth or when it is one month old. This practice is centuries old and has been done in many countries that include the United States, Russia, and Japan. But in the United Kingdom and other European countries as well as Australia, the cropping and docking of a dog’s tail is now considered illegal. Shortening a dog’s tail has become controversial and more countries are starting to limit if not totally ban it, especially if it’s done just for aesthetic reasons.

This appeared as “Tail It Like It Is” in Animal Scene’s January 2016 issue.