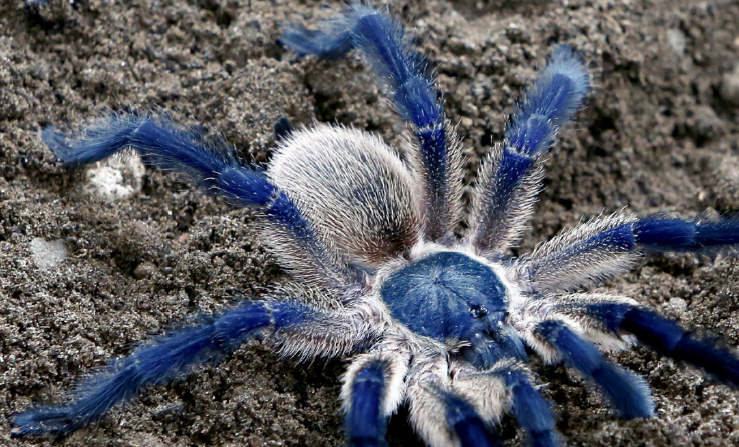 The Socotra Island Blue Baboon or Monocentropus balfouri is a beautifully colored tarantula that most invertebrate hobbyists admire.

It is one of many tarantula species that has blue coloration on their bodies. Their natural habitat is in Socotra Island, Yemen, in the Indian Ocean near the Gulf of Aden, which makes them Old World tarantulas. M. balfouri is a medium sized tarantula, which can reach 10-12 centimeters (cm) in leg span. The males are much smaller than females.

Described by Reginald Innes Pocock in 1897, it is sought after by tarantula keepers because of their unique temperament: they are willing and able to live with others of their kind. This behavior is uncommon in tarantulas since most tarantulas prefer to be kept alone. The Monocentropus balfouri comes from the dryland forests of Socotra Island, so it is best to replicate the conditions of their natural habitat when kept in captivity.

They should have an adequately sized terrarium which allows for growth and provides them with hunting and burrowing space. Spiderlings can also be housed in a small container with pinholes. Since this species can be kept in a communal setup as well, a larger container will be needed to house several species at a time.

In a communal setup for this species, it is best that all of them grow up at the same time, are around the same size, and are from the same egg sac; this is to prevent cannibalism. Adequate food and moisture must also be provided so they do not prey on one another as a last resort for survival.

Burrowing substrate must be kept deep (at least 6” is the most ideal) so cocopeat, vermiculite, or a mix of both will be best. A shallow and wide water dish is also a good option to keep bigger (2” and above) tarantulas hydrated in captivity. The Monocentropus balfouri possesses a rather uncommon behavior among tarantulas. They are able to tolerate the presence of others of their kind, and can even interact with them at times.

One reason why they make good pet tarantulas is because they create beautiful webs and burrows, especially when they are kept together.

Baboon tarantulas are generally fast-moving when threatened or disturbed, and the Socotra Island Blue Baboon is no exception. They are not an aggressive species but their temperaments range from shy to defensive. Monocentropus balfouri would rather hide or retreat to their burrows than attack when threatened. Monocentropus balfouri females generally reach maturity at around 2 years of age. This time can be shortened or lengthened by controlling the frequency of feeding and the amount of they are fed. Males mature earlier than females, sometimes as early as 7 months when subjected to “power-feeding” to speed up the molts so a specimen can reach maturity quickly.

They are good parents; females care for and defend their offspring until they reach their second molt or second instar; prior to this, they are unable to live on their own. A female can lay up to 2 egg sacs after a few mating attempts when enough sperm is deposited in her by the male. There have been several successful breedings of Monocentropus balfouri in the Philippines, with a varying number of individuals per egg sac.

No deaths have been recorded from the bite of a Monocentropus balfouri; it is classified as “mildly venomous.” However, even mildly venomous species must be treated with caution; Monocentropus balfouri should not be handled with bare hands.Hypersensitivity or allergic reactions to the venom can be lethal to children or adults since in the worst cases, a bite can trigger anaphylactic shock. Researchers have not fully evaluated the wild population of Monocentropus balfouri, so the exact number of species in the wild is not known.Aside from their natural predators, human activity and excessive species collection from the wild for sale on the black market are their only threats. However, it is not listed on the International Union for Conservation of Nature (IUCN) Red List of threatened species.Since they are now a popular pet species in the invertebrate keeping hobby and captive breeding attempts have been successful, it is hoped that the illegal collection of this species from the wild will be lessened.

What About Sand as a Substrate?

Sand is a debatable substrate for tarantulas, at least for most baboon keepers. Even if some species came from dryland forests, sand is not the only component of the sandy soil found in the dryland forests. Pure sand cannot hold enough moisture and its use as a substrate can result in difficulties during a tarantula’s molting. While sand is part of its natural habitat, this is not pure sand; rather, it is a type of sandy soil which also enables certain plants to survive under dry conditions.

This appeared as “Tarantella Rhapsody in Blue” in Animal Scene’s June 2016 issue.