We continue our parade of patterned pythons here in Animal Scene with the unmistakable Banana Pinstripe ball python. This vividly colored morph is a combination of two morphs: the banana and the pinstripe.

“Most times, morph names are given by the way they look,” explains Pitlair, Animal Scene’s resident reptile expert, “and these are two classics, where the name actually gives a good representation of how it looks.

“The ‘banana’ gets its name because this morph Is very yellow, and makes you think of the banana fruit,” he continues. “And ‘pinstripe’, because of its random fine line patterns.”

Let’s look more closely at the parents of this striking morph. “The banana is an incomplete dominant,” says Pitlair, “which means that a banana to banana breeding could produce a ‘super-form’ or homozygous form that is distinct from the form when the banana gene is received from only one parent.”

The pinstripe morph is known as a dominant morph, and it produces the same looks whether the snake inherits it from one or both parents. But here Pitlair adds, “There has always been speculation that there is also a ‘super-form’ of the pinstripe morph. There are a few US breeders who claim that they have indeed produced them. This should easily be validated in a few more years.

“In the meantime,” he says, “we continue to mix pinstripes for their fine line patterns. A cost-effective way to do this is to acquire a female pinstripe first, and then acquire the male banana a year later. Since it takes more years for the female to mature, delaying the purchase of the banana male means a year of savings.”

So, what do we need to look for in an ideal banana pinstripe ball python? “You want the color of the banana morph to be vivid, and the pattern of the pinstripe to be present. Any deviation from what you would expect may sometimes be desirable, as this adds uniqueness,” Pitlair explains. 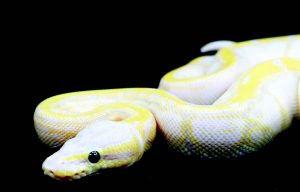 He continues, “Such as in this particular banana pinstripe baby, there are prominent white marks on the sides of its body, whereas you wouldn’t normally get that with a typical banana pinstripe combination. This isn’t by any means a rare occurrence, but it is not something that always shows up, and in that sense, that makes it more desirable.” (Editor’s note: Pitlair is referring to the banana morph used for this photo shoot.)

Before breeding, you need to make sure that the pair are the correct age and weight. It takes at least 1.5 years for ball python males to become sexually active, and 2.5 years for females, although Pitlair says 3 is ideal. The females also need to weigh at least 1.5 kilograms (kg), and should be in good health.

But what happens when you get bad eggs? “If you get bad eggs, you will need to wait another year to try again next season. If you are lucky enough to produce a viable clutch of eggs, incubation takes 2 months. If everything runs smoothly, you should be able to create your desired combination in three years,” Pitlair says.

AND IT WAS ALL YELLOW

The ball python scene is becoming more and more popular each year. But what makes this particular snake such a desirable pet? “Banana pinstripe ball pythons are so appealing to look at,” says Pitlair. “And as we add more combinations, we can sometimes come up with even more spectacular-looking ball pythons.”

Pitlair does not see the hobby going away any time soon. “I think that one reason that ball pythons are so popular is the endless possible morph combinations that’s available. Then there’s their ease of care, their easy personalities, and the trend of their price becoming friendlier for more people,” he says.