Caring for the Sugar Glider

Ever thought about keeping a small critter as a pet? “Critter” is probably a bit off for a sugar glider but it is small, for sure. No challenge is too small if you’re an animal enthusiast. And, according to Animal Scene’s resource person, sugar gliders shouldn’t pose too much of a challenge. Usually, they don’t. Why else would so many people be fascinated with them— cuteness aside—if they were hard to handle?

Sugar gliders are actually marsupials, meaning they’re a bit closer to koalas and kangaroos despite looking and acting like squirrels or flying squirrels. It would explain why, for one, the females have pouches in the middle of their abdomens. And, for another, why most sugar gliders are endemic to the forests of Australia, New Guinea, and the other islands around that area.

They’re used to a moderate temperature so if you do plan to have one, don’t worry about keeping it in a cold area or a dry area. Normal temperatures are just fine.

For being something of an exotic pet, sugar gliders are surprisingly easy to tame—if you know how to do it. Hans Sy, a sugar glider enthusiast, says that this is what attracted him to learning about sugar gliders and wanting to take care of one. He saw one and when he heard how easy they were to tame, he became curious about them.

Apparently, sugar gliders can be tamed even when they’re adults…just as long as they’re alone. The trick to taming one is when you feed it, as well as making sure to discipline the sugar glider. Gently, though, because sugar gliders are notorious for being frightened easily. 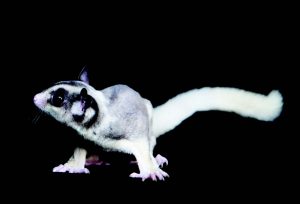 The way to feed sugar gliders is by hand. They are usually small enough to fit in the palm of your hand unless you are a small child; in such cases, ideally, an adult should hold them. (Editor’s note: The sugar glider is not recommended as a pet for young, inexperienced children by many experts, including Hansel, managing editor Jeffrey C. Lim, and several other breeders and enthusiasts. See second article for more.)

When you feed them, you have to do it slowly, advises Hans. Get their attention; let them sniff you and the area out. If you leave it in your hand while feeding it, it will slowly get to know you from there. Sugar gliders are very in tune with their sense of smell and eventually, they will be able to pinpoint you by just your smell (Let’s hope your scent to them is sweet and not otherwise).

If you, personally, are the one regularly feeding them, then they’ll get used to you and get closer to you on their own. Feeding your sugar glider in your hand will help it not only recognize your scent but also condition it to being docile, says Hansel. 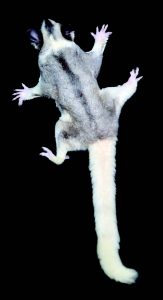 As for what to feed it, Hansel says fruits like apples and grapes are fine, as long as the fruit is sweet. You can feed your sugar glider a mealworm for protein, and it won’t mind. Wild sugar gliders feed on whole insects; try watching a video of a sugar glider eating a praying mantis. Their cuteness will sometimes alleviate the strange sense of fear you’ll get from watching them devour whole insects.

Because sugar gliders are nocturnal and are more used to dim light, creating a nest box for it to stay in is also a priority. For starters, it should be deep so it can burrow but Hansel says not to make it too deep or else you could lose track of any offspring if your sugar glider is pregnant. He makes the nest boxes of his sugar gliders deep but also long in length so that they can be watched. The length also makes it easier to see where they are.

When choosing an area, though, Hansel says that it will help if you have plants around or even a garden. That way, the sugar gliders feel like they’re in their natural habitat. Make sure, though, that they are always dry and not in a cold place. Sugar gliders don’t do well when it comes to rain; he says they can actually get colds and eventually die from not being able to breathe. Yikes!

Sugar gliders are also notorious for stinking up a place so be careful. If you take one in, be sure to regularly clean the general area of their cage but not their nest box. Hansel tries to clean the area of the cage at least every day. That will help, not only in making sure there are no foul smells, but also so that your sugar glider can get to know you and your scent.

Since sugar gliders are, as mentioned, nocturnal, this makes them similar to bats in behavior and “flight.” Don’t worry, though. They are sometimes active during the day though they are sensitive to the light. When setting up their area, make sure that they are in dim light. Bright lights and bright areas scare them. Noise is also a factor. If you have a big dog, or there are big dogs around your area, it may not be a wise idea to get a sugar glider. Loud noises scare these little creatures.

Hansel advises that it’s best to keep your sugar gliders in pairs as opposed to keeping them in a community setting; the latter is possible but the former arrangement is better for them. Speaking of pairs, Hansel also shared advice on how to care for sugar gliders when it’s time to mate. Sugar gliders are monogamous creatures; they will only ever have one partner in their entire life. If a sugar glider loses its partner and another is given to it, it will actually reject that partner and maybe even fight it.

Aside from sugar gliders having their One True Loves, they are known to mate twice a year, which may mean three to four babies will be born within a year. When there are more than two, though, Hansel cautions that you have to be careful and ensure that all are being fed properly. If, for example, there are three and one is weak, the weak one will have a hard time feeding from the mother because the mother’s pouch can only fit two. If need be, you can wean a baby sugar glider from its mother and feed it yourself.

If you want to wean a baby from its mother, you just have to feed it baby food. Hansel uses Gerber baby food for this purpose. When babies are a month or two old, you can start to separate them from their parents. But again, be very careful when handling them. Baby sugar gliders are a tad more fearful than adults.