Animal Scene’s next attraction in our parade of pythons is the spectacular Pied or Piebald ball python, defined by their black and white patches. According to expert breeder and keeper Melvin So, this pattern occurs in other animals as well, such as horses, dogs, birds, cats, pigs, and cattle.

Melvin explained that the ball python, also known by its scientific name Python regius, is the most commonly kept snake in the world, popular with snake handlers of all experience and skill levels. This is because ball pythons come in a dizzying array of colors and patterns that vary significantly from the wild type, otherwise known as a ‘Normal’.

Ball pythons are relatively compact snakes, with adult females measuring 3-5 feet, while adult males average 2-3 feet. They are available from many breeders and pet stores, and are relatively easy to care for. The ball python is native to central and western Africa, and thrive in warm, tropical environments. But they have made their way to every continent except Antarctica, and are even called the “Royal Python” in Europe.

“I personally acquired my first Pied in 2005,” says Melvin, “and to my knowledge, no one has specialized solely in Pied ball pythons because ball pythons have a lot of various mutations that you can play around with, with each mutation having their own beauty, with wonderful colors and patterns that you can mix and match.”

Because Pied ball pythons come with a lot of variance in their color and pattern, some people prefer to keep high white Pieds, while some prefer mid whites and low whites. “But for me,” says Melvin, “a Pied is a Pied. They’re all the same and inherit the same genes.”

Melvin continues, “Pied ball pythons are truly amazing animals. I always get excited when I know I’m producing Piebalds, because no Pieds look alike, and I’m always eager to see what kind of color and pattern I would produce. They’re one of the best morphs to include [in] ‘recipes’ to produce other multi-gene ball pythons.” 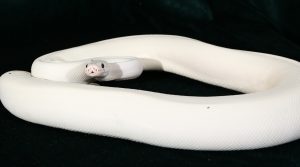 Breeding ball pythons in general is a relatively easy affair. Before breeding, you need to make sure that the pair are the correct age and weight. It takes at least 1.5 years for ball python males to become sexually active, and 2.5 years for females, although 3 is ideal. The females also need to weigh at least 1.5 kg, and should be in good health.

But what happens when you get bad eggs? If you get bad eggs, you will need to wait another year to try again next season. If you are lucky enough to produce a viable clutch of eggs, incubation takes 2 months. If everything runs smoothly, you should be able to create your desired combination in three years.

While it is possible to create a python from 4, 5, or even 6 genes—which could yield unusual colors and patterns in the snake—the downside is that you may have a weaker snake due to genetic defects. “You must know the genetic defects for each mutation,” says Melvin, so you must do you research before breeding, as some mutations are fatal if you breed them together.” He’s generously offered to share his knowledge about the ins and outs of breeding in a future article on genetics, so watch out for that!

Caring for the Ball Python

The care of morphs is just like the care of any other ball python. These snakes require either a terrarium or a rack system with a warm side and a cool side to help them regulate their body temperature, since snakes are cold-blooded. They also need a hiding place on both sides to help them feel safe.