Another Albino Knifefish Hits the Market

About a decade ago, a good friend invited me over to his place to check out his fish collection. Being an avid fish collector, I immediately took off because I knew he had one of the best fish collections in the country. Naturally I was mesmerized by his collection of rare and unique fishes.

One fish that stood out was an Albino Clown Knifefish (Chitala ornata ‘Albino’). And believe me, it sent shivers up the spine when I saw it because it was the first time I ever saw one—actually, he had three in a tank! 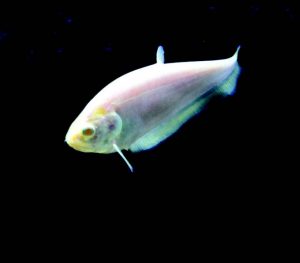 Thus when an importer friend of mine texted me and said he had some Albino Knifefish, I wasn’t particularly thrilled; after all, it has been ten years since I first saw one and it is really very common nowadays. When I asked the price and he texted back that they were R2,000 each, I nearly fell from my seat. I called him and asked how could an Albino Knife sell for R2,000.00 when other fish importers sell them for just a tenth of his price? This, of course, broke his heart because he could not imagine how such a unique fish can sell for so cheaply.

Then it dawned on me that the reason it looked different is because it was a different fish! So without hesitation, I got myself some and paid quite a sum of money.

With the few pieces I had on hand, I was able to take pictures so I could research what species of Knifefish it was. Initially I thought it was the albino version of the African Brown Knifefish (Xenomystus nigri). It looked very similar except for one thing: the X. nigri does not have a dorsal fin while this one did.

After some more research, I became sure that this fish was the albino variant of the Bronze Featherback, or Notopterus notopterus.

It is found in both freshwater and brackish water; therefore, it should be comfortable with a little salt in the water, though this is not necessary. This fish is not very demanding about its water parameter needs. It prefers slightly acidic to alkaline water with a pH range of 6.0-8.0. It also prefers water hardness of 36-268 ppm and water temperature of 24°C-28°C.

It is a medium sized Knifefish with a maximum size of 24 inches or 60 cm in the wild but is much smaller in captivity. The N. notopterus is not as readily available in the Philippine aquarium fish market compared to other Asian Knifefishes like the Clown Knifefish (Chitala ornata), which actually have invaded our waters, specifically Laguna de Bay; and the Royal Knifefish (Chitala blanci). Therefore, it is rarely seen in the aquariums of Filipino fishkeepers. But once in a while we do see some available for sale. In the aquarium, the N. notopterus is quite shy and would prefer a dimly lit aquarium to one that is brightly lit. It will find a territory in the tank where it can shelter; usually, it nestles near driftwood, rocks, or other décor in the tank, filter, or powerhead. It behaves this way since it is a nocturnal fish and will be more active at night than in the daytime. Thus it would be wise to leave food in the tank at night when you call it a day and let the N. notopterus eat in the dark.

Feeding the N. notopterus does not pose a problem. In the wild, it feeds on insects, fish, crustaceans, and some young roots of aquatic plants. In captivity, it feeds well on live feeder fish and shrimp, and tubifex worms and earthworms. It will readily eat non-live food as well, like bits of fish and shrimp, frozen bloodworms, etc. They, however, do not take commercial dried fish food.

Since the N. notopterus may potentially grow to a modest size, a tank of at least 75 gallons should be its minimum tank size. Provide a good filter that can adequately process the amount of waste a big fish can produce. Overhead filters, trickle filters, or sump should be your choices. Hand in hand with the strong filter system, regular water change of about 50 to 70% weekly should go a long way in keeping your tank water in top quality.

As with other Knifefishes, N. notopterus does well in a community tank; however, a little planning is required since it is quite aggressive. Keep tankmates limited to medium sized fishes or bigger as smaller ones may be seen as prey. Tankmates should also be hardy as meek ones like goldfishes and live bearers will be killed. Bigger, more robust fishes are the best tankmates for N. notopterus.

The best thing with having an albino N. notopterus is you can have a monster fish tank featuring albino fishes. Imagine a huge tank with the different albino fish we have in the country, like the Silver Arowana (Osteoglossum bicirrhosum), Senegal Bichir (Polypterus senegalus), Giant Gourami (Osphronemus goramy), Wels Catfish (Silurus glanis), Red Pacu (Piaractus brachypomus), Clown Knifefish (Chitala ornate), Oscar (Astronotus ocellatus), Sailfin Pleco (Pterygoplichthys gibbiceps), and Tinfoil Barb (Barbonymus schwanenfeldii). Of course, this is true only if their sizes are compatible because some of these in the list grow so much bigger. Nevertheless, the Albino N. notopterus should hold its own in such a community.