The Case of the “Paampons”

A scratching sound was the first thing I heard when I woke up. Scratch, scratch, scratch – the sound wasn’t urgent, but it was persistent enough to rouse me from sleep.

Groggy and unsure if I was just dreaming, I tried to find the source of the noise. It got louder as I walked down the hallway. Scratch, scratch. It reminded me of short fingernails on a chalkboard: slightly grating, hard to ignore.

Then, I saw what was causing the racket.

It was a black-and-white cat scratching at my window with both front paws. I couldn’t tell if it was male or female. When it saw me, it scratched with renewed fervor and meowed, as if to ask, “May I come in?” 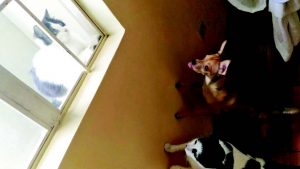 I sighed. Based on its medium-length fur and orange eyes, the feline was no stray. I had a feeling it belonged to my neighbor upstairs and must have escaped somehow. I tapped my finger on the window and was rewarded by loud purrs.

The cat’s meowing did not go unnoticed by the four furry residents of my apartment. My dog, always eager to meet new cat friends, was wagging his tail in anticipation. All three of my cats were trying to catch glimpses of our surprise guest, manifesting different degrees of shock.

I asked the building supervisor to tell my neighbor about the escapee pet. Soon enough, it was escorted back to its rightful owner.

It was not going to be the last time the feline would drop by for a visit.

Two days later, I woke up to the feverish barking of my dog. I checked the time: six in the morning.

I padded across the hallway to our living room where my dog had set up camp, his nose sniffing wildly at the gap under the door. “What is it, Topper?” I asked, as if he would somehow answer back.

I looked out the window beside the door and saw a cat with startling blue eyes and seal points. Just like my previous visitor, it was no stray, either. It was meowing nonstop, but Topper had stopped barking because he had already called my attention and knew his job was done. I opened the door and joined the Siamese cat at my doorstep. I found out it was male and extremely friendly. I stroked his fur as he purred in content, knowing I should be calling the building supervisor instead of petting a cat who was not my own.

Wearing just my sleepwear, and with my unruly hair on my head like a bird’s nest, I sat there as my new feline friend rubbed cream-colored fur all over me. I relished the moment, which I knew wouldn’t last.

When I finally went back into my apartment, I could see him sitting patiently on my welcome mat. A cat with a mission, he stayed there for thirty more minutes as I waited for the building super to arrive.

“They are choosing you as their new human,” my boyfriend told me over lunch. “Mga paampon sila.” They want to be adopted.

I shook my head. “They already have a human to take care of them.”

“So many apartments in this building and the two cats headed over to yours. What were the odds? Mimi did, too, not so long ago. She lay dying at your doorstep on Christmas Eve, remember? And her human gave her to you because you saved her.”

Mimi was a fluke, I thought to myself. Her human, a well-meaning guy who lived next door, realized Mimi was better off with someone else. He then gave Mimi to me as a Christmas present the day after I rushed her to the vet.

I thought Mimi was going to die. She didn’t, and she had brought me so much love and joy since then.

“Mimi is a one-time deal. There will be no Mimi Part Two,” I said with finality.

But I had second thoughts the next day when an old visitor dropped by one last time.

Scratch, scratch. Oh, no, not again, I thought to myself as I swung my feet off the bed.

I walked straight to the window where the scratching sound was coming from. There it was, the black-and-white cat that had come to visit me not so long ago.

When I opened the door, it jumped off the window ledge and ran straight towards me. I stroked its back and realized it was a female because of the bulge in her belly.

The smile on my face faded quickly. I had heard rumors about my neighbor breeding cats in their apartment. I began to understand why she and the other cat had come to my door. Perhaps they needed help. Perhaps they were tired of being used.

Perhaps they knew that where I lived, there would be no forced sex for the sake of profit.

I asked the super about my neighbors. Who were they, what did they do for a living, why did they have so many cats? The supervisor shrugged, saying he suspected that the tenants bred and sold cats, but he wasn’t sure. Backyard breeders, I thought.

He also said they hadn’t paid rent in four months. They would be kicked out very soon.

I thought about how it was going to be an exercise in futility.

I had guessed they would be gone by January. I couldn’t find proof of neglect or abuse, barring the three occasions when the two cats ran away. I knew it wasn’t enough to make a case and I had a sinking feeling that it was just a matter of days before they left the building. I felt utterly useless. My sleuthing was all for nothing. My attempts to communicate remained unproductive. Besides, my neighbor was a breeder, and I knew that no amount of talking would change her mind. To her, money was the bottom line.

The New Year, I was sure of it, would be full of pleasant surprises and wonderful moments. However, it would also be peppered by familiar problems. For instance, I knew that I couldn’t afford to take care of one more animal even if I wanted to. I also knew that time and time again, I would meet more paampons: animals that would want me to adopt them.

I haven’t seen my upstairs neighbor since then. The cats never came back to visit, either. Perhaps they had all left and found a new apartment.

Downstairs, I heard a dog barking. I went down to investigate and saw a German Shepherd pup wagging its tail as it tugged excitedly at its leash. Apparently, my downstairs neighbor had just bought her from a colleague.

“She’s so friendly. Has she been neutered yet?”

“Well, she’s going to live longer if you have her spayed. My dog and three cats have been neutered and they’re all quite healthy. You’ve met my dog Topper, right?” I smiled, perhaps poignantly, hoping the ensuing conversation would guarantee that the puppy would live happier than the two beautiful paampon cats I met not so long ago.