An Overview of Animal Sidekicks in Literature

Long before the modern age of fantasy films and CGI, different cultures of old already acknowledged the value—and, let’s be real, the Cool Factor—of having an animal on your side. Here are some of the more popular ones you might want to look into.

He may be stuffed but yes, Hobbes is an animal. He encompasses both the roles of mighty companion in the midst of a great battle—albeit only in Calvin’s imagination—and the faithful pet you hold tight to your chest after a long day at school that, frankly, sucked. Fuzzy, ferocious, and only faintly annoying at times, a six-year-old couldn’t ask for a better buddy. Tigers (Panthera tigris) are the largest cats and are typically solitary; Hobbes maintains that his kind exhibits a kind of undisputed grace but no one can really know that since they’re nearly always alone, save for when a tigress has cubs. Unlike the other great cats, tigers don’t utilize their sense of smell when hunting. They can live up to 20 years in the wilderness of Eurasia.

A true legend whose story was formed and told along with those of great heroes, this divine winged stallion was already assisting in quests against other more dangerous beasts, bringing fallen demigod heroes to Olympus on his back. What he symbolizes has changed through the ages, but since the end of World War II, the flying horse has been an emblem of British Airborne 6th Division’s successful capture and defense of what is now known as the “Pegasus Bridge.” No one has attempted to scientifically classify Pegasus himself so far, but horses (Equus caballus) have proven to be pretty fascinating in their own right. Narcolepsy in humans was only identified over a century ago, but wasn’t properly studied as a disorder until about the 1970s; for horses, it was an even more recent discovery.

The Eagles of Manwe (The Lord of the Rings by J.R.R Tolkien)

You know it’s fixing to be spine-tinglingly epic when we’re talking about Tolkien. While not strictly sidekicks, they do come to Gandalf’s (or another worthy hero’s) aid when the need is dire. It’s just that they’re not at Gandalf’s beck and call, nor do they answer to any human or halfling. More than 60 species of eagle exist throughout the world, most of which can be found in Eurasia; only about 14 of these can be found anywhere else. There’s a popular notion that eagles mate for life, but what’s truly interesting, if avian romance isn’t your thing, is that several of these species don’t seem to be related to each other at all, and have only been classified together on the basis of appearance and behavior. But genetically? They’re no more related to one another than they are to a hawk or a parrot.

A slightly terrifying creature, the Qilin is often described as having a vaguely equine body, although some scrolls and records describe it as being more deer-like. Said to be covered in scales like a fish, it is enveloped in flames that do not consume it. While loyal to no particular human, the Qilin is said to be the protector of the innocent, and the symbol of a benevolent, prosperous dynasty or ruler. Legend has it that one visited the mother of Confucius while she was pregnant with him, signaling the coming of a great sage. Deer (Cervidae) are naturally marvelous creatures, but they also have exhibited this incredible talent for befriending humans these days. They have been known to approach people, so the Confucius story isn’t too far-fetched. They come in many colors and sizes depending on where you go, from the Philippine mouse-deer to the elks of Sweden, and most of them are pretty friendly.

Picture it—a young Harry Potter, after discovering the truth of his heritage, is told that he may bring one creature with him to school. A snowy white owl grips his attention when he looks around the shop at Diagon Alley, and Hedwig leaves with him in her brass cage. A truer feathered friend no one will ever find, too; towards the end of Harry’s tumultuous youth, she lays down her life to save the Boy Who Lived. It is theorized by fans that Harry never bought another owl. 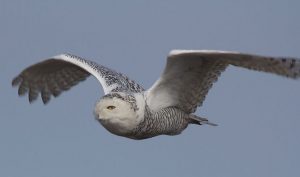 The snowy owl (Bubo scandiacus), in real life, is quite a fun bird in that it’s diurnal. We’re pretty sure Hedwig got more sleep than most of her kin, though. Female snowy owls can lay anywhere between 3 to 11 eggs at a time and actually never become completely white. The owl’s diet kind of determines whether or not they migrate, depending on how much a particular owl likes lemmings. The less picky ones will make do with other small woodland animals, but the amazing thing is that the snowy owl isn’t indiscriminate about what it pursues; it perches somewhere nearby and takes its time identifying its prey before going in for the kill.

Despite being the title character, Charlotte the spider would probably insist on being called Wilbur’s sidekick. It is her capacity for love and her great wit that make her a true heroine and a true friend, and a wonderful mother both to Wilbur and the offspring she would never get to see. She teaches readers about the value of planning for the future, and not worrying even when the end is near. The barn spider (Araneus cavaticus) is a fantastic creature to have around. Posing no threat to humans or to livestock, their entire bodies are hairy, and they exhibit a relatively obvious difference between sexes. Like other spiders, the females are larger; the difference can be anywhere between 6 to 10 millimeters. They’ll keep mosquitoes down to a minimum and so, like Charlotte, just might save a couple of lives!

The Earthworm, the Centipede, the Lady-Bug, Etc. (James and the Giant Peach by Roald Dahl)

You would think that the first thing you’d do when you grow to be larger than those who try to squash you is try to squash them right back–but not these creatures. Instead, they remember the kindness of a small boy who refused to do the bidding of his evil aunts, and invite him along on their grand escape. For every human being, there are an estimated 200 million insects and related invertebrates? It’s enough to make your skin crawl sometimes, until you think about it in terms of what they contribute to the environment. Ladybugs (coccinellidae) for example, being the cutest, eat up aphids, which breed fast and destroy gardens and crops. Even centipedes (chilopoda), which are venomous, get rid of the pests your house spider (Parasteatoda tepidariorum) doesn’t eat, so it’s really best to leave them be. They’re not interested in harming you at all.

Spiders generally tend to adapt to the environments they’re born in, so don’t shoo a barn spider from a barn or a house spider from your house. Don’t even let a garden spider indoors when the weather is harsh. They just won’t survive the sudden change.

Fiver (Watership Down by Richard Adams)

Again, not strictly a sidekick, given that he and Hazel are brothers. But Fiver is an incredible character who proves himself to be indispensable despite his physical weakness. His connection with nature and the spirit world is his main strength, though often scoffed by bigger rabbits who see this as a reason to push him around. In the end, he is the reason that the warren he and his brother seek to build survives. The main lesson here is to never underestimate the runt of the litter. Rabbits (Oryctolagus cuniculus) are, as a species, pretty resilient. They have an extremely short gestation period of about a month, have particularly heightened senses, and can make use of their own droppings, technically called pellets, when food is hard to come by in the winter. They’re also marvelously social creatures, to the point that a lone rabbit can die of loneliness, which is why if you’re thinking of getting one, don’t. Get a fluffle–er, a couple.