The alligator gar is a prehistoric-looking fish and is often referred to as “living fossils” or “primitive fishes,” because it has retained characteristics of their earliest ancestors, such as the ability to breathe air and water. THE NAME, THE THING

The alligator gar gets its name from its resemblance to the American alligator, especially with their long sharp teeth and long snout. The largest alligator gar ever caught and officially recorded measured 8” 5¼’ (2.572 meters or m) long, although anecdotal evidence suggests that they can grow up to 10” (3 m) in length. Platinum alligator gar, on the other hand, usually grow up to 60”.These fish have different scales from other fish. Instead they have hard, white, jagged enamel-like diamond scales called ganoid scales. Adult alligator gars have a dual row of large sharp teeth in the upper jaw, which they use for impaling and holding prey.

We asked aquarium expert Glenn Angeles, MD, about these visually striking giants. “Gar look prehistoric, which is why they appeal to a lot of hobbyists,” he explained. “It is also a hardy fish, but many hobbyists fail to anticipate how big they grow.”

Glenn explains what makes the snow alligator gar and platinum alligator gar unique: “Snow gar are really all white, while platinum gar still have a tinge of green on top. Some specimens have black blotches on their tails. So, if you want an all-white gar then it’s quite rare.” 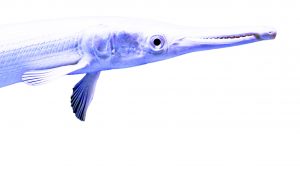 “Alligator gar are predator animals,” Glenn warns. “This makes it difficult to set them up in a community environment, because anything smaller than they are could potentially become their food.” However, gars are generally not territorial or aggressive in the aquarium. If they grow together with other fish species, then they won’t consider the other fish as food.

Alligator gar can live for many years, sometimes even over fifty years. But they are slow to mature, and don’t spawn until they are about 10 years old. Their growth rate is initially rapid but slows with age. A general formula to keep in mind that is that for every additional 10 inches the alligator gar grows, its age doubles. For example, a 35-inch gar is typically about 4 years old, a 47-inch gar about 8, and an 80-inch gar might be 40 years old.

In the wild, gars often hide in caves and crevices, and look for similar hiding spaces in an aquarium. However, alligator gar are not overly aggressive toward larger species if these are fish that they do not consider prey. They live in closely-knit schools of groups of 3-6.

While the snow alligator gar is a beautiful fish, it demands a large tank with a powerful filtration system and high-quality food. And because the snow and platinum alligator gar are in great demand in Asia, the price is often too high for any but the most dedicated aquarium hobbyists. Glenn explains that the gars available are usually bred in other Southeast Asian countries, such as Indonesia.

However, the care of the snow alligator is the same as that of a regular alligator gar. Alligator gar require a very large aquarium and ample resources for them to thrive in captivity. Gars are carnivores and should be fed a diet of live feeder fish, such as minnows and shrimp. However, young gars can be trained to accept frozen food and pellets.

Because of their meaty diet, they produce a significant amount of waste that aquarists must deal with. Multiple filtration systems and weekly water changes can help keep the water conditions at healthy levels.

Reports of alligator gar successfully spawning in the aquarium are extremely rare. The conditions must be precise for a successful spawning to occur. In the wild, gars need flooding in order to trigger the event. Once flooding has occurred, gars move into the grassy shallows to spawn. A female alligator gar can produce an average of 150,000 per spawn. However, the eggs of alligator gar are poisonous to humans if ingested.

With so many requirements and challenges associated with raising a snow alligator gar, one might ask why anyone would go through the bother. Glenn’s answer: “I love an all-white fish. It looks so pure. And a white fish looks stunning in a dark tank.”