Guinea pigs or cavies have long been among the most popular of domestic household pets. Smaller and easier to handle than rabbits, more even-tempered and less likely to bite than hamsters (this writer speaks from experience!), these gentle, medium-sized rodents can be suitable pets even for young children. The animals one most often sees in zoos and pet shops are a breed known as American guinea pigs, by the far the most popular and most commonly encountered variety. They are characterized by their short, smooth coats, which come in a variety of colors and patterns. There exist, however, a number of other interesting varieties, some of which are quite striking to the eye.

The common variety can be kept either indoors or outside the house, so long as they aren’t exposed to extreme temperatures or very wet conditions.

There exist a number of other guinea pig breeds. Though they can appear drastically different from one another on the surface, all guinea pigs share similar dietary requirements. Pure herbivores (certain rodents, hamsters for example, appreciate a bit of animal protein every now and then), ‘pigs thrive even on just fresh grass or banana leaves, which according to cavy breeder Josel Lacasandile, are what most breeders feed their animals, along with hay-based cavy pellets. Some breeders purchase imported hay from pet stores.

They eat a variety of plant-based foods and are equally happy whether given store-bought feed pellets or vegetable table scraps from the kitchen.

Many Filipino kids are fairly familiar with guinea pigs. If they haven’t kept one as a pet, they’ve probably encountered the little critters in petting zoos. Naturally inquisitive and friendly, cavies are especially popular in petting zoos since they usually don’t mind being handled and are always to ready to chomp down on a carrot or any other vegetable, making them fun to feed.

At the Ark Avilon Zoo along C5 road in Pasig, guinea pig feeding is a popular activity. Visitors skewer a slice of carrot or camote onto the end of a stick and lower it into the enclosure. A mini-riot then ensues as the balls of fur scurry and climb over one another to sink their teeth into the morsel.

It is believed that guinea pigs were originally bred as food animals in South America as early as 5,000 BC (How they came to be named after a country in West Africa remains a mystery to this day). They were eventually adopted as pets. Peruvian guinea pigs may be either short-haired or long-haired animals. The former is distinguishable from the common American variety because of its longer fur that forms two swirls or “rossetes” on its back. Breeders often emphasize these swirls, sprucing them up with a brush, during pet shows.

Like the American, it too comes in a variety of colors and coat patterns. Though its fur grows much longer than that of the American ‘pig, this is nothing compared to the long-haired variety which, true to its name, has the longest fur of any ‘pig. The long-haired Peruvian’s fur grows so long that it usually covers the eyes and brushes the ground. Quite often, the adult animal is so concealed by its silky coat that it can be difficult to tell which end is which.

While a hit in pet shows, the long-haired version can be difficult to keep as a pet as they are incapable of grooming themselves and thus need constant attention. Cavie breeder Jossel recommends regular combing, bathing, and treatment for parasites to avoid hair damage. Hair wrapping is also a must for keeping their fur long and undamaged. Without regular brushing and clipping, their long coats, which never stop growing, can become matted and may interfere with with the animal’s ability to eat or even move. Bred for show, long-haired Peruvians cannot survive if left on their own.

It is believed that selective breeding of the Peruvian cavy started as early as the 1200s in South America. It is one of the original three varieties of guinea pig breeds acknowledged by the Cavy Breeders Association of America. 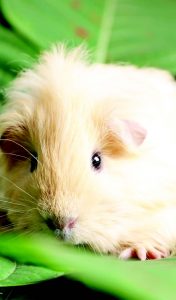 Also known as a “silkie,” Sheltie guinea pigs have long, straight fur that grows in the direction of its back. Its fur is soft and smooth, thus its other name. It could be mistaken for a Peruvian long-hair, except that its fur does not cover the animal’s face, and does not grow quite as long.

Though not as lushly furred as a Peruvian, the Sheltie still requires considerable grooming to prevent knots and tangles. This makes them unsuitable for novice or casual pet owners who may not be willing or able to exert the necessary effort to maintain the animal in a healthy state. It is considered one of the friendlier and more gentle breeds of cavy and is quite popular with kids in petting zoos.

The breed is believed to have been bred in England in the 1970s when Peruvian cavies were crossbred with shorter-haired varieties. Acquiring one can be quite expensive, according to Jossel, especially if both parents are imported directly. The Texel guinea pig is also called the “long-haired Sheltie,” but at first glance, it appears that such is not the case as its fur does not appear very long, and thus it does not bear a strong resemblance to the Sheltie. This is because a Texel’s fur, instead of growing straight toward the back like a Sheltie’s, is tightly curled and thus gives the impression of a shorter coat when, in fact, the strands are actually very long.

As with any other long-haired variety, the Texel requires extensive grooming, especially since its curly hair is even more prone to tangles than that of straight-haired cavies. It is also recommended that they be bathed more often than other varieties as the curls are more prone to picking up dirt and debris.

When preparing their Texels for shows, Jossel recommends not combing the fur to preserve and emphasize the ringlets. One should just and hand brush the animal and manually untangle any matted curls.

A relatively new bred that traces its origins from England in the 1980s, the Texel was recognized as an official breed by the American Cavy Breeders Association in 1998. In the Philippines, it is among the more expensive breeds. Local online prices for Texels can be as high as ₱ 3,000. In contrast, American cavies normally cost around PhP 200-300. The coronet is another long-haired guinea pig that takes its name from the crest of fur on top of its head which makes it an eye-catching animal. This crest occurs naturally and cannot be combed down.

The rest of its fur, which comes in a variety of colors and patterns, grows straight toward the back of its body, like a Sheltie’s. The breed was developed in the 1970s in England and the United States by cross-breeding silkie guinea pigs with crested short-haired ones. It was first recognized as a distinct breed in 1998 by the American Rabbit Breeders Association.

Like most breeds bred for show, the Coronet fares best indoors and under controlled temperatures and environments. It does not do well outdoors. One of the newest breeds of cavy, the Lunkarya was developed only in 1986. It is a striking looking animal with its dense, harsh coat that forms two rossetes toward the rump.

Descended from the Peruvian variety, its long fur grows and curls in all directions, resulting in a rather unkempt appearance. Though some experts have advised against raising such a thickly furred breed in how climates, Jossel says he has not had any problems as he has bred Lunkaryas for over ten years, saying that cavies are capable of adjusting or adapting to most environments.

Male cavies (called “boars”) are sexually mature by the time they are three months while females (“sows”) can reproduce as early as two months after they are born. It is generally recommended that a boar be at least four months old before being allowed to mate, while sows should be between three to six months of age. It can be risky to allow a sow to get pregnant beyond the age of eight months. Boars tend to be larger than sows. Male ‘pigs average between 2-3 pounds while females weigh around 1.5-2.5 lbs. Unlike most other rodents that are born naked and helpless, Guinea pig babies are born precocial. They have teeth, fur, and can squeak and move around just like the adults almost as soon as they are born. They will nurse from their mother during the first few days to get colostrum, but will also nibble adult food, like hay and moistened pellets, shortly after birth. Unlike hamster babies, young cavies are in little danger of being cannibalized by their mother.

Under good conditions, guinea pigs live anywhere from four to eight years. The record for cavie longevity, according to the Guiness Book of World Records, is held by one in England that lived to the age of fourteen years and ten months.

Yup, you read that correctly: Guinea pigs were originally bred as miniature livestock. They remain a popular meat choice in countries like Ecuador, Peru, and Colombia. Nature conservation advocates in the USA actually began a movement advocating a switch from cattle to Guinea pigs since the latter do not require the wide swathes of land needed to raise bovines, and thus have a much smaller impact on the environment.

It doesn’t seem to have caught on though and Guinea pig hasn’t made it to the menu of most households or restaurants outside of South America.

A Guinea pig ancestor, Josephoartigasia monesi, which lived about three million years ago in South America, is the biggest fossil rodent ever found. It weighed over a ton and had huge incisors that paleontologists believe were used to dig into the ground as the animal searched for food. A guinea pig cousin, the capybara, is the largest modern rodent and can weigh up to 60 kg.