The Brittany: More Setter than Spaniel

The Brittany is a medium-sized dog known for its athleticity and friendly behavior. It takes its name from Brittany in France, its place of origin.

The Brittany was first bred as a gun dog. Also called bird dogs and hunting dogs, these are dogs that help hunters find game, usually birds. They fall under three main categories: pointers and setters, or breeds that alert hunters to the whereabouts of their game such as the English Pointer and English Setter; flushing dogs, or breeds that move the birds towards the hunters such as the English Cocker Spaniel; and retrievers, which pick up the fallen birds and bring them to the hunter, such as the Golden Retriever. The Brittany was first known as the Brittany Spaniel. There has been some contention with the ‘spaniel’ in its name, because despite looking like a spaniel, its hunting habits more resemble that of a pointer or setter. This is also why it’s often included in pointer groups in dog shows. The American Kennel Club formally dropped the ‘spaniel’ from its name in 1982.

This American breed isn’t popular in Asia (and even Europe), though Efren Sy, Jr. is trying to change that. A Chow-Chow breeder, Sy imported Ricky, the first purebred Brittany in the Philippines. Ricky, already a show champion before he hit two years old, is descended from the current world champion. “This litter had seven on nine puppies because when the Brittany gives birth, it’s a big litter. I said I wanted a male first and a female second. I didn’t know at that time that this breed matures late. He’ll be three in June. He’ll be bigger, more beautiful,” Sy says.

Sy started breeding Chow-Chows in 2007 after being fascinated by a dog show, but his dogs didn’t start winning until 2010, when he became the Philippine representative of a Thai breeder (one of his dogs was on the cover of Animal Scene in 2017). “In less than a year, we were already winning, unlike before, when it took me more than a year to win one dog,” Sy shares, referring to the importance of both training and bloodline in a show dog.

He first came cross the Brittany in 2015 when a US-based breeder brought her world champion to a local dog show. The breeder wouldn’t sell him her dog, though she did agree to sell him two of his pups, with Ricky, who arrived when he was a year and a half, being the first one. “(Ricky) came here for the Circuit Show, finished the Championship title, I sent him back to Canada to get a Canadian champion. After that, he was sent back here to train. He’s already finished in less than six months. Also a Best in show winner already,” Sy says. “He already finished all the titles in the Philippines. His next goal now is campaigning here until June, then I bring him to Thailand for the Impact show in July.” Talk about a busy schedule! “After Thailand, I’m looking at Korea and Japan, because I want the Brittany to be famous in Asia.”

The second pup, a female, is set to arrive early to mid-year. She’ll be about a year old, but will have been finished as a show dog as well. Sy has exclusive rights to this breeder’s pups, though he doesn’t mind if other people bring in Brittanys of their own.

Easy to Care For

Sy says that the reason the Brittany isn’t known in Asia and Europe is primarily because it’s an American breed. “The European type is different. It’s smaller. They use them for hunting, not for show,” he explains.

This is a shame, because aside from being a good-looking breed, it is also easy to care for, and is the perfect companion for the active owner. “He runs with me. I can take him outside in the sun,” Sy says. “He can run, he can swim, he loves activities. (He’s a) high energy dog. You need to run him everyday (for) almost an hour if you can.”

Thankfully, Ricky is easy to get along with. “He’s easy to train because he’s a smart dog. He loves to train, he loves activities, he loves to bond.” 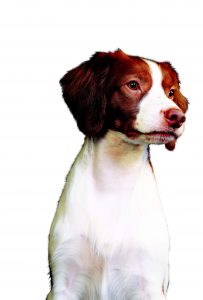 To keep Ricky in tip top form, Sy keeps him on a strict diet of grain-free dog food. “Because (dog food with) grain makes the dog shed. Sometimes we feed (him) raw (food)—when we need him to bulk up fast, we add raw meat and egg yolk.”

The breed is also smart and personable, plus, upkeep is simple. “They’re very intelligent dogs. You’ll have lots of fun with the Brittany… The temperament is excellent. You can bring him out, anyone can pat him. He loves people, he loves attention. He’s like a baby. When you’re sitting down, he’ll sit on your lap,” Sy says. “(Their coats are) easy (to dry)—just a couple of minutes. It’s not a picky eater (and is) easy to take along. Genetically, it’s a very healthy dog. It doesn’t carry any defect. You can see it in the breed standard.”

Brittanys mature late, acting like an adolescent up until it’s three years old. “When they mature, the breeder said that the dog will tend to become a one-man master. That’s what we’re avoiding now,” Sy says. “What we’re doing is we’re mixing the handlers. Everyone handles the dog because if the dog becomes accustomed to one master… he will only only show for one handler, and that’s bad.”

Show and Tell: Some Challenges

Sy knows that it won’t be easy to popularize the Brittany in Asia. “(Most) European judges… don’t appreciate the dog. They don’t know the dog. Some Australian judges know the dog,” he says. “The only challenge that I see here is showing the Philippines–an FCI country–most of the judges are European. If the judge doesn’t know the breed, you can win the pointer group, but the Best in Show is hard to win.” 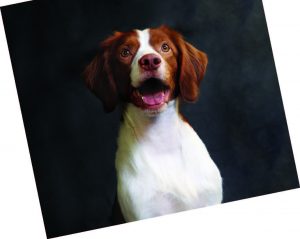 And Ricky’s been a hit outside the show circuit, too! “…when you bring him out, people are interested. ‘What’s that breed?’ Of course, he’s the first one in the Philippines. I introduce him as a bird dog, because he really is one. They’re used for hunting.”