A Simply Magnificent Fish and Gourami

My elementary days were a memorable challenge in terms of funding my pet hobbies. I had pigeons and fish. We were not a well-off family.

When my uncle Teodoro gave me my first batch of aquarium fish, I placed them in small plastic jars where our candies were stored. In such small a space with no aeration, the fish did not last very long. The most common question asked of me these days is what fish one can start with a small aquarium without aeration. The popular notion of goldfish in a fish bowl is a big NO. I would reply to them in layman’s terms that there is a group of fish that can thrive well without high quantity of aeration. They are fish called Anabantid or Anabantoid; they are also known as Labyrinths.

Gourami fishes belong to the Labyrinths. They are different from common aquarium fishes because of how they breathe. Fish receive oxygen by passing water through their gills. However, Gouramies possess an additional respiratory organ called the “labyrinth,” which gives them the distinct ability to breathe oxygen.

Gourami is one of the most popular aquarium fish species. Its family ranges from medium- to large-sized, but some species do not play well with others while some are too timid. Most varieties are great for community tanks.

They have interesting behavior and dynamic, striking colors. Some colors even look artificial because of their vibrancy. They are hardy fish and ideal for beginners but advance hobbyists would definitely enjoy them as well. Gourami are closely related to Betta and Paradise fish.

Variations and Overview of Close Cousins 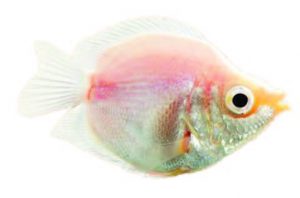 Balloon versions, such as the pearl and kissing gourami, also evolve but I am not a fan of them.

They will readily accept foods like flakes, sinking pellets, or bits. They devour live foods such as brine shrimps, tubifex, and blood worms.

Gourami breed in a unique way. They range from surface bubble-nests builders to nest building in underwater plants. Often, the males take care of the brood and in the case of betta, females are often killed if not removed after breeding. I tried breeding them during my elementary school days but did not succeed mainly because of limited knowledge.

Paradise fish are extremely hardy and can survive in a range of water and tank conditions. Slightly acidic water and planted tanks are ideal for them. Paradise fish prefer no water movement, similar to its natural habitat.

Like Gourami and Betta, paradise fish are also a species of labyrinth fish and can breathe surface air. The bigger the surface area, the better for them. The fins and colors on the males are vibrant and it makes them easy to differentiate from the females.

Paradise fish are highly territorial towards each other. For this reason, it is advisable to keep only one male with a group of females in the aquarium. Similar to Betta, when multiple males are introduced to the same aquarium, they will fight with each other. They are also fin nippers so angelfish and goldfish are not their ideal tank mates.

Like Betta, paradise fish are jumpers and care should be taken to amply cover the top of the aquarium. 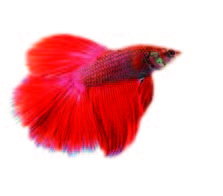 The Siamese fighting fish commonly known as the Betta is popular in the aquarium trade. Bettas are a member of the Gourami family and are known to be highly territorial. Similar to paradise males in particular, they are prone to high levels of aggression and will attack each other if housed in the same tank. Popular varieties are Plakat, crown tail, double tail, half-moon, and combtail.