Hiker shares heartbreaking attempt to save 145 beached whales in NZ

American traveler and photographer Liz Carlson was enjoying her trek on the remote west coast of Stewart Island in New Zealand last Saturday, when the unexpected happened.

She saw about 145 pilot whales becoming beached in the low surf and described it as “the worst feeling I’ve ever experienced.”

“Desperately we grabbed their tails and pushed and yelled, before we got hammered by them thrashing around. It was useless. They were so big and heavy and the realisation we could do nothing to save them,” wrote Carlson in her Instagram post.

Authorities quickly went to the scene and the Department of Conservation (DOC) said half of the whales were already dead when they reached the scene, while the others were euthanized.

According to a report by The Express, New Zealand, Australia and the United States have witnessed separate incidents, which appeared to be linked to the strong behavioral drives among the whales, while Florida is witnessing the “red tide” bloom.

Most recently, environment officials saw 27 marine mammals and a humpback whale dead from a mass beaching event on the coast of Victoria’s East Gippsland, while more than 20 dolphins died in Florida because of the “red tide” algal bloom.

These things also happened back in 1983, when about 90 false killer whales were reported to have died.

“Every year, thousands of whales, dolphins and porpoises get into trouble on coastlines around the world, and unless those that strand alive or become trapped in shallow water are responded rapidly, they will become distressed and may die,” said Whale and Dolphin Conservation spokesman Danny Groves in a statement. 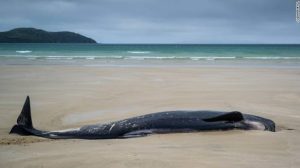 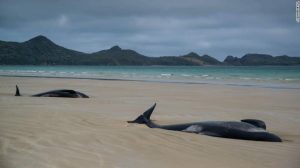 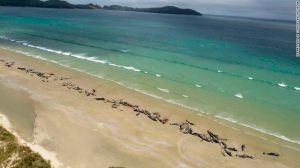 “Groups coming ashore typically belong to those species that have a ‘leader’ and very tight social cohesion. Pilot whales are a good example. Usually when they strand it appears that either a lead whale has made a navigational mistake or one individual has become sick or wounded and led the rest of its pod onto the shore,” he added.

Global Research has recently posted about their study on the “Pacific Ocean turning into a Desert,” which explains how the ocean is dying – killing the marine life too.

You can read their full report here: www.globalresearch.ca