How pets can get you through stress, anxiety and depression

After college, 23-year-old Clarence Zamora decided to pack up her bags, leave her parents’ house, and move to a different city with her most loyal companion, her cat Jarvis. Clarence had Jarvis as a gift from her godfather when he was just a three-month-old kitten. Since then, he had always been a part of her everyday life and journey, especially when her grandmother died three years ago. She went through a rough battle with depression, but with Jarvis’ clingy and affectionate personality, her struggles became easier to handle.

According to the National Institute of Health-US National Library of Medicine, pets have a way of increasing Oxytocin (which reduces stress) and decreasing cortisol (which increases stress). Human Animal Bond Research Institute Executive Director Steven Feldman describes it as the “pet effect.” He says this helps battle such conditions and emotions such as depression, anxiety, and loneliness, all of which Clarence went through. “I don’t really know how to describe it. Everything was just a lot more bearable when I had him a few months after she passed. His quiet companionship was a welcome distraction,” Clarence said.

When she found a job in BGC as a Project Coordinator for an international law firm, Clarence did not hesitate and brought Jarvis to the big city in the spaceship-designed backpack that he loves.

“I think my dynamics with Jarvis can be best compared to a Harry Potter reference: He’s like my patronus and he keeps the bad juju away,” shared Clarence. “It’s like having a furry child and I do often refer to him as my son, as Kate McKinnon does with her Nino.” 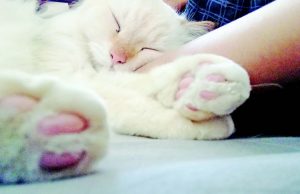 According to the young woman, Jarvis is an excellent cuddler. “I love dozing off with him in bed. When I read or paint in my desk, he likes to sit on my lap and watch,” she added.

Having an unfamiliar environment and a new job, Clarence is glad Jarvis is around to keep her company, who is a great reminder of hope, life and her home.