George H.W. Bush, the 41st US president between 1989 and 1993, died at the age of 94 last Friday and many people mourned his death, including his internet-famous dog, Sully.

Sully was photographed alongside Bush’s casket, with the caption, “Mission complete.” This two-year-old yellow Labrador-Retriever was assigned to Bush in June this year as a service dog, which was only months after former First Lady Barbara Bush died at the age of 92. Sully was a great support dog, who spent his time entertaining and keeping Bush company as the former president suffered from Parkinson’s disease that caused his failing health until his death. Sully has been travelling with his late master on the flight from Texas to Washington and back again this week. However, after the wake of Bush, Sully will not be going home with any of the Bush family members, according to a statement made by America’s VetDogs.

“Later this week, Sully will return back to America’s VetDogs in Smithtown, New York, for a temporary stay throughout the holiday season before joining the Walter Reed National Military Medical Center’s Facilities Dog Program,” the statement said. 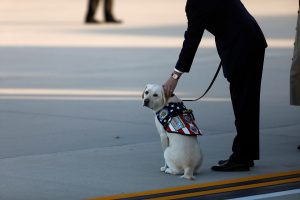 Sully was named after pilot Chesley “Sully” Sullenberger III, who saved all 155 passengers and crew on board a passenger jet on the Hudson River in 2009.

He will go back to the dog program to assist wounded soldiers.