A Tarantula with No Name

Very few species from the theraphosid family of spiders — the ones colloquially called “tarantulas” — were identified as having originated from the Philippine islands, but this certainly does not reflect whether or not they can thrive in the archipelago. Our diverse country harbors a spectacular array of species not yet formally described, with some already entering arachnoculture even without much research done on their ecology and population.

I, for one, have been fortunate enough to discover a still unnamed tarantula.

In April 2016, my nephew and I were taking a stroll along a mountain path when we passed by a steep wall of rock deposits of volcanic origin. On these rocks we noticed tunnel-like webs, the construction of which was typical of tarantulas, and we were pretty certain that at least some were inhabited. 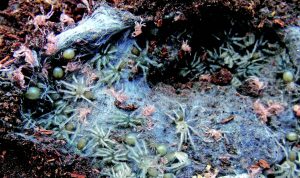 I lured one into the open using a twig and out sprang a furious flurry of black legs and fangs, no doubt indignant at the transgression I committed. My nephew and I surveyed the entire rock wall and noted that some of the webbed burrows were situated about 3 m or so above the ground. All in all, we found less than ten of such constructions and all were confined to just that stretch of rock wall, which was only about 15 meters from end to end. The spiders could be found only on that spot and nowhere else. Aware of the current trend among many local arachnid collectors to collect as many individuals as they could for quick money, I realized that something had to be done before the population was discovered by anyone unscrupulous enough to drive that species into extinction. When my nephew and I came back to the site, we had a few containers ready for a project that I hoped might boost the numbers of their kind.

The spiders we found were from the genus Orphnaecus, a little-known genus of moderately-sized tarantulas comprising three described species: two from the Philippines and one from New Guinea. However, many of the discoveries within the country from previous years of tarantulas not yet known to science belonged to this genus, pointing to the tremendous speciation that the genus underwent within the islands. The newly-discovered tarantula had a leg span of around 4 inches, with black legs, a rich brown carapace, and a brown abdomen often iridescent purple under the right lighting. We collected three adult specimens.

The lone male lasted only a couple of weeks before it expired. This was most likely a very old individual that was on its way to natural death. The other two, maintained separately, dug a tunnel around the pieces of rocks I provided and developed a habit of waiting for prey to come by their respective tunnel entrances. Weeks later, both withdrew into their dark domains.

One of the hang-ups of many tarantula keepers worldwide with regards to Asian fossorial tarantulas is that these animals often bury themselves for extended periods of time. Offered prey items during this period are fully ignored. Because these spiders incorporate their exuviae into their tunnel walls, keepers see no signs of life from the spiders and become understandably distraught about whether their precious wards are still alive or not.

I, of course, could not hold myself back any longer and lifted a flat piece of rock that served as a roofing for one of the two females. Enclosed within the veil of web was the female tarantula positioned upside down, with what appeared like a wad of cotton atop her abdomen — an egg sac!

The excitement quickly turned into gloom when I remembered that tarantulas often ate their eggs when disturbed. Perhaps I should have waited much longer. My fear was later proven correct, but I still had one female left. This time around, I opted to sit on my hands. On March 22 the following year, when I thought I had waited long enough, I took a peek and there was the remaining female surrounded by a multitude of spiderlings!

I found all spiderlings cute. Those ones were almost translucent gray with darker gray abdomens and paler hairs.

There appeared to be two batches of egg sacs as many were still in the so-called “eggs with legs” stage. Double clutching — that is, laying eggs twice in a row — by theraphosids was relatively rare and mentioned only in anecdotal reports, involving mostly the arboreal types. Nevertheless, out of fear of the mother eating her spiderlings due to the disturbance, I gingerly lifted the webbing around the clutch and managed to separate the babies for rearing.

There were about 400 of those baby spiders. None were subsequently sold nor distributed to other arachnoculturists. The intent, above all, was to release as many of them as possible back to their native habitat at a stage when they were large enough to fend off most predators, thus raising the possibility that they would reach maturity, unlike if such a clutch was left to the vagaries of nature.

The aforementioned rock wall featured sympatric species that used the cracks and crevices in the rocks to procure food and secure shelter. Crickets, roaches, silverfishes, millipedes, hammerhead worms, and earthworms inhabited the habitat, but there were predators as well.

Apart from the Orphnaecus, the tailless whip scorpion Charon grayi, centipedes from the genera Otostigmus and Scutigera and the Order Geophilomorpha, and Liocheles australasiae scorpions also occurred sympatrically, with the latter being the most numerous.

When these animals were observed at night using ultraviolet light, there were several dozens of them. Apart from these arthropods, the gecko Gekko monarchus could also be observed on any given night among these predators, no doubt hunting for possible prey. Given the size of the Orphnaecus, such geckos also fell prey to them. The spiders could sometimes be seen foraging for prey and indeed are bold enough to wander out in the open.

It seemed that these Orphnaecus are the alpha predators in their microhabitat.

Sharing the same general habitat but not the rock wall was a much smaller tarantula species, Phlogiellus bundokalbo. This was a highly fossorial species known to create several holes and deep burrows in packed soil. A casual observer might think that five tunnels meant five spiders, but in reality, there might be just one tarantula deep within. Early last year, my nephew and I also found a webbed tunnel on a tree not far from where the Orphnaecus were, but the hole was empty. None of such webs were found again, but it would be extremely interesting to discover an arboreal tarantula, the types of which were rare in the Philippines.

Two risks were present which might contribute to this species’ extinction: habitat tampering and discovery of the population by unethical collectors. The Department of Public Works and Highways had undertaken concrete riprapping of several slopes and rock walls around the country with no regard for rock-dwelling populations of flora and fauna. Given the lucrative nature of such projects, there were some that I thought appeared to be of dubious justification. Because these tarantulas’ habitat was easily accessible to people, such a project being undertaken was not far-fetched, and with obvious disastrous consequences for the species. As mentioned earlier, the effects of unconscionable collecting for the pet trade could be acutely tragic for this species, especially when we took into consideration its severely localized population. Once harvested for the trade, this species’ numbers would definitely plummet. It was vital that a captive breeding program aimed at providing a hedge towards any risk, man-made or otherwise, be undertaken.

Apart from releasing all of the resulting offspring back into the wild, I was also considering establishing a second population of these spiders within the same general locale, but somewhere more inaccessible. Because it would be a crying shame if we lost a species simply out of our apathy and greed.