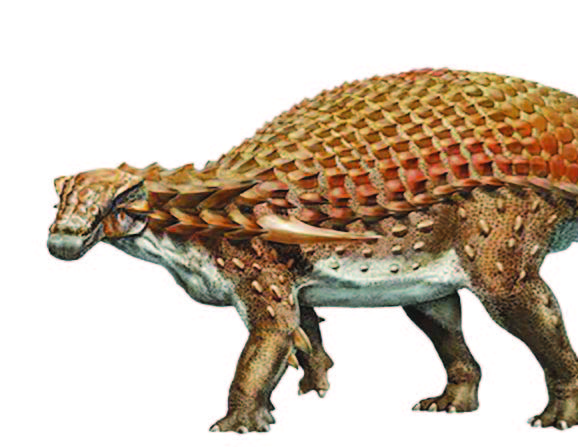 When miner Shawn Funk strapped himself to an excavator at the Suncor Millennium Mine in Canada on March 21, 2011, he had no idea what he’d pull out of the ground. He’d been digging for heavy crude oil called bitumen in the oil-sand mine for 12 years, according to a 2017 article by Michael Greshko published in National Geographic, and never found anything more exciting than an occasional petrified tree stump – but today was different.

Right after lunch, his backhoe hit something big. At first it looked like a giant, petrified pineapple – but when the mining company flew in experts from the Royal Tyrrell Museum of Paleontology, they knew they’d found something very special. The find was quickly transported some 420 miles to the museum, where a technician named Mark Mitchell spent an incredible six years chipping through rock to expose a dinosaur locked in stone since the Early Cretaceous period, 110 million years ago. And considering its age, it didn’t look the worse for wear. “We didn’t just find a skeleton,” said researcher Caleb Brown in a 2017 interview with National Geographic. “We found a dinosaur as it would have been.”

Preserved from the snout to the hips was a Nodosaur, an 18-foot long armored dinosaur related to the club-tailed Ankylosaurs of Dino Riders fame (mine had a giant toy crossbow mounted on its back). Instead of a shin-splitting club, the Nodosaur had foot-long spikes on its shoulders, a complete set of armor (even its face has plates) and two-toned camouflage – it was reddish on top and white beneath.

Built like tanks, Nodosaurs and Ankylosaurs were the rhinos of their day – armored grazers which tried their best to avoid predators like the Acrocanthosaurus, a cousin of Tyrannosaurus Rex. The fossilized Nodosaur possibly drowned in a flood and washed out to sea, where it floated upside down for several weeks before bursting and sinking to the seabed with enough force to bury it under six inches of sediment, keeping the animal’s original form.

Though possibly tens of thousands of dinosaur species once walked the Earth, only 700 have been described as distinct species – ranging from the long-necked, 130-foot Argentinosaurus to the double-winged, 13-inch Anchiornis. Dinosaur lover Jaypee Yan, who teaches biology at the Ateneo de Manila University in Quezon City. The dinosaur is Therizinosaurus, a theropod which either ate plants or insects. (Gregg Yan)

For this story, I talked with my brother, a lifelong dinosaur enthusiast who teaches biology at the Ateneo de Manila University in Quezon City.

“Dinosaurs are roughly divided into two major groups – Saurischians and Ornithischians. Saurischians are then divided into another two major groups – Sauropods and Therapods. Famous Sauropods include the giant long-necked Diplodocus and Apatosaurus,” he explained. “Well-known Therapods include Tyrannosaurus rex and Velociraptor, whose descendants eventually evolved into the feathered birds we have today.”

Ornithischians on the other hand, include horned dinosaurs like Triceratops and armored animals like the Suncor Nodosaur.

“Clad in armor made from thick plates of bone, herbivorous Nodosaurs roamed the plains of the Americas grazing on low-lying plants (grass hadn’t evolved yet) while enjoying a degree of protection from the predators they shared their homes with.”

More dinosaur species await discovery. “Dinosaurs have existed for over 150 million years, compared with mammals which have only been around some 60 million years. It’s therefore not surprising that dinosaurs reached a level of diversity encompassing over 500 genera and thousands of species,” Yan said. Asked if a lucky digger might unearth a dinosaur in the Philippines, Yan sadly shook his head. “Not likely as the Philippine archipelago was formed long after the last dinosaurs died out.”

At least dinosaur lovers can now see the closest thing to a living dinosaur outside Jurassic World by visiting the Suncor Nodosaur at the Royal Tyrrell Museum in Drumheller, Canada.