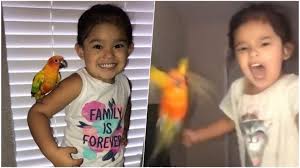 WATCH: Little girl trains pet bird to attack anyone she screams at

A video posted by Twitter user Lord Flocko/@Apex_sH has recently gone viral after it showed his niece’s power with animals – most preferably, her pet bird.

Apparently, the little girl has the ability to command her pet bird to attack anyone she screams at!

In the video, she was standing on a bed while the bird was just perching on the bed frame. The girl turns to face the camera and shrieks from the top of her lungs. Without any hesitation, the bird instantly flies towards whoever’s recording the video.

The video has now been watched 26 million times, 1.8 million of them liking the tweet and 611,000 are talking about it.

Twitter users were torn between being impressed and terrified. 