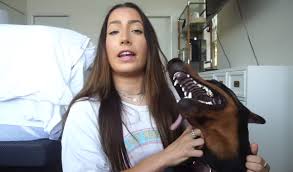 Los Angeles Police Department’s Animal Cruelty Task Force determined that Youtuber Brooke Houts’ dog is not in any immediate danger, so they allowed Houts to keep it.

The 20-year-old YouTube star has been accused of abusing her dog when she posted a video of her apparently abusing her Doberman on her channel, which has more than 330,000 subscribers.

In the 50-second video, Houts was attempting to prank her dog, Sphinx, by placing plastic wrap on the door and letting her dog run out. “We’re just gonna see what he does,” she said. The video was then cut to the dog jumping on her chest, so he responded by slapping him across its face.

It did not stop there. Houts had another altercation with Sphinx, where she could be heard yelling “stop” and appeared to spit on the dog. At the end of the footage, the dog attempted once again to get close to Houts’ face, but she pushed him hard across the room.

The video has since been taken down, but not before thousands of viewers already shared it on social media that drew widespread criticism.

On Tuesday, the YouTuber tweeted an apology letter for those who had been affected negatively by the video.

“I want to clarify that I am NOT a dog abuser of animal abuser in any way, shape, or form,” she wrote. “Anyone who has witnessed or heard true animal abuse will be able to clearly see that.”

Houts nor YouTube had not responded on the incident, whether there will be any repercussions on Houts’ channel.

“Content where there is infliction of unnecessary suffering or harm deliberately causing an animal distress [is prohibited,” according to YouTube’s updated policies last July on violent or graphic content. Those who violates this policy will be removed.

Twitter users also noticed that Houts had been posting about her frustration by Sphinx’s behavior through Twitter.

A lot of people are now condemning the YouTuber’s actions, with PETA calling out on YouTube to remove Houts from the platform immediately.

Related stories:
– Police looks for animal abuser who tied firecracker to cat’s paw and set it off
– Ohio judge gives animal abusers creative sentences that fit their crimes
– Driver ties dog to vehicle because there was no space inside