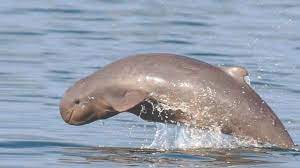 You may have heard of the adorable, melon-headed Irrawaddy dolphin (Orcaella brevirostris) in places like the Mekong river, but did you know that these shy and charismatic mammals can also be found in the Philippines?

Irrawaddy dolphins can be found along the coastal areas of Southeast and South Asia, according to a 2020 article by Anais Remili published in the Whale Scientists website. They inhabit freshwater rivers and brackish water – this is where the river meets the ocean creating a habitat of saltwater and freshwater. There are subpopulations in the Ayeyarwady river of Myanmar, the Mahakam river of Indonesian Borneo, the Mekong River, and the Sonkhla lagoon in Thailand.

The Philippines has three small subpopulations which can be found in Malampaya Sound in Palawan, the coasts of Quezon, and in the Ilolilo-Guimaras Strait, as written by Drs. Bruno Oberle and Jon Paul Rodrigues in a 2020 letter to Sec. Mark Villar. These dolphins enjoy the deeper portions of the rivers they live in and are known to move up and down the river they live in as the tides. They would swim away from shore during low tides and swim up river during high tides, likely following the fish that they love to eat.

Irrawaddy dolphins feed near fisherfolk who are laying out or pulling up their nets. In some dolphin habitats like the Ayeyarwady river and Kuching, they would accept fish discarded by the fisherfolk, according to a 2020 article by the International Whaling Commission, The Iloilo-Guimaras Straits dolphins are known to help local fishermen locate areas in the river that have shrimp and fish.

Irrawaddy dolphins can grow up to 2.8 meters and have a blunt, dorsal fin, unlike marine dolphins. They’re not picky with their food since they are known to eat a wide variety of fish, sometimes even surfacing with mud stains on their heads and backs which is evidence of feeding in the muddy river bottom. They can also spit water to help catch their favorite fish.

Unlike their more energetic Spinner dolphin cousins (Stenelle longirostirs) who are known for their mid-air acrobatics, Irrawaddy dolphins prefer to take their sweet time, clocking in at an easy 25 kilometers per hour. This also makes it difficult for researchers to identify individual dolphins through their photos.

In an interview with National Geographic from 2019, Lindsay Porter, a dolphin expert from the University of St. Andrews, shared her experience studying Irrawaddy dolphins in the Mekong river. She said that they hardly brought their bodies out of the water, making it difficult for them to take photos of the key features that helped them distinguish individuals.

When identifying individual dolphins, researchers would take photos of the dorsal area or the top of the body, especially the dorsal fins, to use as an ID photo for each dolphin. By collecting photos and creating a catalog, they could keep track of the families in each subpopulation.

The Iloilo-Guimaras Strait group of dolphins, found along the coast of Guimaras, Negros and Panay islands, is one of the smaller populations. There are only around 6 to 13 mature individuals left in the strait, according to the regional International Union for Conservation of Nature (IUCN) Red List assessment.

Study group from Silliman University, University of St. La Salle, and the Tropical Marine Research and Conservation have been working with local communities by providing training for dolphin strandings and instances when dolphins got trapped in nets. Despite these conservation efforts, this subpopulation is still under a lot of pressure.

A bridge connecting the islands of Panay, Negros, and Guimaras was proposed to boost economic development. Unfortunately, this brdige cuts right through the vital habitat of the Iloilo-Guimaras Irrawaddy dolphin population, based on a 2020 article by Angelico Jose C. Tiongson and collegues published online by the Cambridge University Press. Studies shows that the noise pollution from the construction would threaten the lives and well-being of these gentle mammals because they hunted for fish and communicated with each other through echolocation.

In August, this bridge project was temporarily shelved due to the COVID-19 pandemic and to conduct feasibility studies, including the impacts to the habitat of the Irrawaddy dolphin population of the area, as written by Czeriza Valencia in a 2020 news article.

Irrawaddy dolphins are also threatened by gill net fishing, where a fine mesh net is left in deep water overnight to catch shrimp and other small fish, because feeding dolphins could get trapped in the nets and drown.

Fast moving boats and ferries also tend to collide with unsuspecting dolphins as seen in recorded photos of individuals with properller cut marks. In fact, nearly 60% of the dolphins photoidentified in Iloilo strait have signs of injury from propellers or nets. Dolphins in polluted water have also been observed to develop skin lesions likely due to habitat degradation.

For many years, these dolphins have coexisted with fishing communities. Recent changes in fishing methods, engine-powered boats, water pollution, and unsustainable building projects now threated the very survival of the gentle Irrawaddy Dolphins. Photoidentification, research, and community education have helped lobby for and set aside. Important Marine Mammal Areas, which are habitats vital for marine mammal survival that have the potential to be set aside for conservation, according to the website of Marine Mammal Habitat.

In the Mekong, the population of the Irrawaddy dolphins have remained stable since 2010. By working with local communities, residents, and NGOs, local ecotourism and conservation efforts have helped the dolphins bounce back. This just goes to show how possible it is to stoke local ecotourism while creating safe spaces for Irrawaddy Dolphins to survive.

You might want to read:
– Robot dolphins created to replace real animals in captivity
– Whale and dolphin watching in Bais: Animal Scene sails to cetacean central in search of dolphins
– Cats, dolphins and one smart raven: The CIA’s secret animal spies